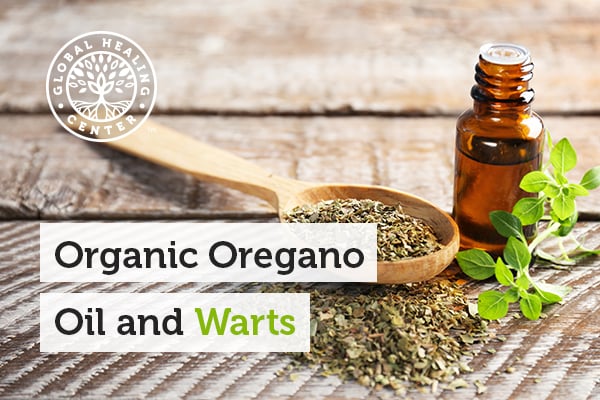 Warts can be more than just unsightly or annoying growths that appear on the feet, hands, or elsewhere on the body. They can become very painful, spread to other areas on the body, and, in the case of a plantar wart outbreak, even inhibit your ability to walk. One of the most effective remedies that has been used by natural health practitioners to combat the growth and development of warts is organic oregano oil.

Oregano oil, made from the perennial herb oregano, comes from the Greek word meaning 'joy of the mountain'. In addition to exhibiting serious activity against strains like Salmonella and E. coli, carvacrol-containing oregano oil has been shown by a large (and growing) body of research to have a bountiful number of uses. Among the attributes most commonly reported as being successful by alternative health professions is oregano oil's ability to combat warts.

To utilize oregano for the inhibition of warts, begin with mixing 1 teaspoon of oregano oil with around 8 teaspoons of coconut or olive oil. This mixture will help to dilute the oregano oil proficiently while still maintaining the integrity of the oil. The addition of coconut or olive oil will also present some great rejuvenating characteristics when it comes to the skin and overall body health.

Now apply the mixture around four to six times throughout the day. You can also add tape over the wart to minimize the ability for the growth to receive proper oxygen. This can help to speed up the process. After about a week of use with organic oregano oil, you should notice a difference in the size of the wart.

Other Benefits of Oregano Oil

In addition to fighting warts, oregano oil is a valuable asset to your daily nutritional intake due to its unique ingredient content that allows it to function as:

Properties like these give organic oregano oil uses that extend well beyond addressing unsightly warts. Organic oregano oil is ideal for daily intake, for use in an emergency medical kit, and as a great resource around the house!