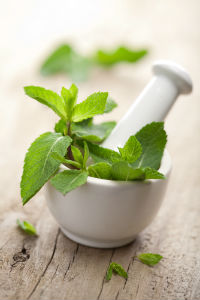 Today I want to explore ten of the best detox herbs used to cleanse various organs and systems of the body. Most of these herbs have been part of the therapeutic lexicon for hundreds, if not thousands, of years and are known across many cultures and borders to help with various ailments and health conditions. Due to their long history, popularity, and reported effectiveness, some of these herbs are also active ingredients in some of our most effective body cleansing products.

Made from the sap of the acacia tree, this substance has been used for centuries to help relieve symptoms of diarrhea by adding bulk to bowel movements and improving electrolyte absorption. It is also one of the ingredients in Oxy-Powder®. As a hydrocolloid, gum acacia is used as an emulsifier to stabilize and facilitate synergy between two ingredients which would not normally mix well together.[1]

For centuries, parts of the entire dandelion plant have been used to help with a wide range of maladies. It promotes bowel regularity and good hydration levels in the body. And, its famous derivative, dandelion tea, has been used to help with joint discomfort. Dandelion root is used in our liver-cleansing product, Liver Health because it supports bile production, and bile helps transport toxins out of the body. Dandelion is also believed by some to help the body’s immune system.[2]

This herb has been used to help the gallbladder and liver for over 2,000 years. It has been known to help produce bile, which in turn improves digestive function. Milk thistle is an active ingredient in Liver Health, which is our most popular liver and gallbladder cleansing product.[3]

Europeans were first introduced to this herb in the 1600’s. Three active agents in black walnut, juglone, tannins, and iodine, make it particularly effective in natural health and wellness practices. Juglone is the black walnut’s natural defense mechanism, which helps fight against harmful organisms like bacteria and fungus. Tannins also help deter harmful organisms. Iodine, an essential mineral to all life forms, helps reduce the lifespan of many harmful organisms.

Get Your Free Guide to Detox Your Health, Your Home, & Your Life

Here's your chance to change your life for the better! Enter your email below to get our free guide to detoxing your health, home, and life!

The subject of much folklore, wormwood's potent reputation as a component of absinthe lead to it being banned in the United States for many years. Despite the momentary hiccup, wormwood is back. It was used in ancient Egypt to fight harmful organisms such as pinworms and roundworms and to aid with digestion.

Cilantro is instrumental in helping the body rid itself of dangerous toxic metals that accumulate in organ tissues. It is also a very popular herb that is talked about on almost every cooking show. Cilantro possesses natural cleansing agents that contain compounds which bind to toxic metals and help pull them out of various tissues.[4]

Herbalists have used alfalfa leaf for centuries to help with a variety of infections. Many believed that it also helped the body fight stomach ulcers and also helped stimulate a healthy appetite.

Peppermint has a soothing quality that helps with coughing associated with colds and flu. It also helps with sore throats and sinus irritation. Because it helps also aids the body in fighting off harmful organisms, it is an active ingredient in lung cleansing products like Global Healing's Lung Health.[5]

Eucalyptus is another herb that helps with lung cleansing. It possesses expectorant properties, helps fight bacteria, and attacks viruses. It can also be used as a topical ointment for chest congestion and a stopped up nose. Aboriginal medicine highly regarded it for its calming, soothing properties.