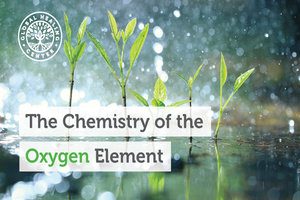 First identified in the 17th century, oxygen is a gaseous, non-metallic element that makes life possible. The chemist and physician John Mayow proved that oxygen was critical to lifeforms, and could be removed by a naked flame and respiration. A key indication of oxygen's supreme importance was realized when researchers demonstrated that mice could survive longer in air heated by mercury oxide rather than air heated by using a flame [which consumes oxygen]. They were able to prove that the depletion of "eminently breathable air," later termed oxygen, directly resulted in the death of a mouse.[1]

Oxygen is also the most plentiful element in the earth’s crust, providing roughly 46% of its mass.[2] Only 21% of the air we breathe is oxygen, nitrogen and other gasses make up the majority.[3]

Like sulfur, selenium, tellurium, and polonium, oxygen is a chalcogen, meaning it’s found in group 16 on the periodic table of elements. It's believed that chalcogen translates as, “ore maker.”[4]

Other Properties of Oxygen and General Chemistry

Although oxygen is a colorless, odorless, tasteless gas that is non-combustible, it's not completely benign in all situations. Mixing liquid oxygen with fuel is highly explosive. Liquid oxygen can cause frostbite of the eyes and skin. Inhalation of 100% oxygen can cause mild, moderate, or severe concerns such as nausea, pulmonary edema, or collapse.[7]

How Oxygen Molecules are Formed

Oxygen atoms are neutral, as they possess eight protons (positive charge) and eight electrons (negative charge).[10] Molecules are formed when two or more atoms are chemically joined together. When two oxygen atoms create a molecule, it is known as molecular oxygen (O2). This diatomic molecule is the oxygen required for respiration and supporting life.

Molecular oxygen was detected in space in 2011, could that mean extra-terrestrial life is out there? Scientists have known that individual oxygen atoms exist in space for quite some time, but the diatomic molecules were a new discovery. European and American space agencies’ findings suggest that oxygen is locked up in ice that coats tiny dust grains. The molecular oxygen they detected was formed after starlight warmed the icy grains, releasing water, which was converted into diatomic oxygen molecules.[11]

Oxygen in Our Lives

In emergency situations, supplemental oxygen is given when normal oxygenation is impaired. Many things can impair oxygenation, anaphylaxis is a common catalyst. Carbon monoxide poisoning may also be treated by administering pure oxygen.[13]

A more recently established use of oxygen includes hyperbaric oxygen therapy, which involves enclosing a person in a pressurized glass chamber where they breathe higher-than-normal levels of oxygen. A technician slowly increases the pressure to levels 1.5 to 3 times higher than normal atmospheric air pressure. The blood becomes more thoroughly saturated with oxygen and it's believed that this therapy may help the body heal itself and speed injury recovery time.

Oxygen can also be used to cleanse the human body and strengthen cellular tissue. Oxy-Powder® is a vegan-friendly, all natural, oxygen-based colon cleanser. It boosts nutrient absorption and promotes digestive health by cleansing the colon and small intestine. It harnesses the power of monoatomic, time-release oxygen to relieve bloating and occasional constipation. Use Oxy-Powder to effectively flush toxins from your intestinal tract and support your health and longevity.