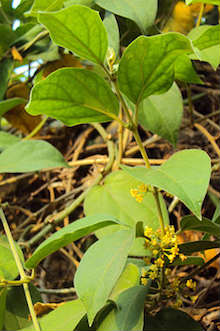 Gymnema sylvestre is an herb found in the tropical forests of India and Asia. Gymnema has historic use as a therapy for diabetes and arthritis and has also earned significant recent interest as a multi-supportive therapy for weight management. Evidence suggests gymnema can reduce cravings for sweets, sugar absorption during digestion, and promote normal blood sugar levels.

How Does Gymnema Work?

Appetite Suppression: The gymnema plant contains a number of compounds, such as acidic glycosides and anthraquinones. The primary bioactive constituent of gymnema, known as gymnemic acid, is found in the leaves and roots. Gymnemic acids are sweetness inhibitors. Simply put, chewing gymnema leaves will reduce the taste of sugar, or “sweetness,” in the mouth. The temporary effect is noticed with both natural and artificial sweeteners; and suggests gymnema may have value as an appetite suppressant.

This conclusion was cited in an a Physiology & Behavior study where researchers tested the effects of gymnema on average weight persons who were fasting. They found that those who took gymnema one hour before being offered food ate less than the participants who had not consume gymnema.[1]

Blocks Sugar Absorption: During digestion, gymnemic acids have a “sugar blocking” property. A South Korean study noted this with lab rats that were given a gymnema supplement and experienced reduced sugar absorption during digestion.[2] Structurally, gymnemic acids are very similar to glucose and behave in the intestine in a similar way. When gymnemic acids lock in to intestinal receptors, they effectively lock out glucose. This prevents sugar from being absorbed. This effect has a twofold benefit in that it helps balance blood sugar, and it promotes lean body mass by lessening the amount of sugar that gets stored as fat.

Nutritional Support for Diabetics: Evidence suggests there is merit to gymnema’s other historical use as a diabetic therapy. This value is due in part to its tendency to promote normal blood sugar and positively affect insulin production. Researchers at the Postgraduate Institute of Basic Medical Sciences Madras, India showed gymnema supplementation produces an increase in insulin levels.[3] Insulin is produced in the pancreas and it’s believed that the insulin increase may be due to a regeneration of pancreatic cells.

A 2012 study in at King's College in London demonstrated that gymnema stimulates insulin secretion in mice and humans.[4] A 2009 study at Holy Cross College in Tamil Nadu, India published in the journal "Phytomedicine" found that gymnema leaf was effective at lowering blood sugar and levels of lipids or fats in the bloodstream of laboratory rats.[5]

A paper entitled, “Antidiabetic effect of a leaf extract from Gymnema sylvestre in non-insulin-dependent diabetes mellitus patients,” documented twenty-two patients with type-2 diabetes, all who were taking oral diabetic medication. Over a period of 18-20 months, the patients were also given 400 mg. of gymnema each day. When the study concluded, sixteen of the patients reduced their traditional medications and five had ceased taking them.[6]

Can Gymnema Help With Weight Loss?

A 2012 study by researchers in the Department of Biology at Sri Venkateswara University produced astounding conclusions in support of gymnema’s role as a weight loss aid.

Over the course of 8 weeks, researchers administered a gymnema extract to obese rats; the obesity had been induced by feeding the rats a high fat diet. At the end of the study, it was noted that the rats had experienced a decrease in body weight and food consumption. To some surprise, it was also noted that “bad cholesterol” levels had fallen. Not only are the results clear evidence in support of gymnema’s use in traditional medicine, it also gives insight into the possibility that the herb could be used as a therapy for blood lipid levels.

Gymnema is typically found in capsule form, although powders and teas are available as well. When looking for a gymnema supplement, it is important to note that it should contain no fillers, binders, or excipients.

Although research suggests the sugar blocking mechanism of gymnema, it is important to maintain a healthy, balanced diet and exercise regularly. When used as part of a comprehensive weight management strategy, gymnema may have significant benefit.