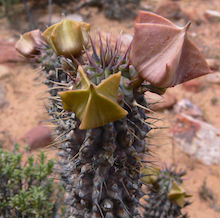 Hoodia gordonii is a succulent plant native to South Africa and Asia where indigenous populations have traditionally used it, most notably the Khoi-San, as an appetite and thirst suppressant during long hunting expeditions into harsh environments. These appetite-suppressing qualities of hoodia gordonii have made for a number of inquiries into its potential as a weight loss aid.

How does Hoodia Work?

Formal research of hoodia goordonii began in the 1960’s but it wasn’t until 1977 when the active ingredient in hoodia responsible for appetite suppression, known as P57, was isolated by the South African Council for Scientific and Industrial Research. P57 is an oxypregnane steroidal glycoside and increases the amount of adenosine triphosphate (ATP) in the body.

ATP is a nucleotide that, when broken down, releases energy for the body to use during metabolic processes. An elevated level of ATP will prompt the hypothalamus to send a signal to the brain to let you know you’ve had enough food by making you feel “full.” Hoodia operates by tricking the body into feeling full, which helps to curb appetite and reduce caloric intake. Glucose also raises ATP levels and suppresses appetite but, unlike glucose, P57 contains no calories.

In addition to historic cultural use and anecdotal popularity among naturopaths, hoodia gordonii has also been studied in various clinical settings. Conclusions of these studies support the claim of the appetite-suppressing mechanism of hoodia gordonii and suggest it may be an adjunct to weight control when used with caloric restriction and a healthy lifestyle.

David MacLean, MD, an adjunct associate professor at Brown University and a former researcher at Pfizer, published a report in the Sept. 10, 2004, issue of Brain Research documenting his study to determine if P57 had an effect on the amount of hypothalamic ATP in the body.

In his study, MacLean collected the hypothalamus from a group of fetal rats. A separate group of rats had P57 injected directly into their brains and their hypothalamus’ collected 24 hours later. In comparing the two, MacLean found that rats injected with P57 had increased levels of hypothalamic ATP by 5-150%.

Additionally, another aspect of MacLean’s study involved injecting P57 into the third ventricle. In these rats, ATP increases of 40-60% were observed and food intake over the following 24-hour period reduced by 50-60%.

Richard M. Goldfarb, MD, medical director of Bucks County Clinical Research, conducted a small, unpublished, efficacy study on DEX-L10, a hoodia nutritional supplement available in a 500-mg. capsule. Goldfarb’s study consisted of seven overweight participants who were instructed to take two capsules daily, in conjunction with eating a balanced breakfast and taking a multivitamin. The participants’ other diet and exercise habits were not altered.

"After [the appetite suppressant effect] accumulates in the system... after only a few days we saw study participants cut their calories in half and not desire any additional food,” said Goldfarb.

One of the most common stumbling blocks to weight loss is breaking bad habits related to food. Bad habits can come in the form of excessive snacking, eating late at night, over consumption, the wrong food choices, or all of the above. Many people have trouble simply getting into the habit of, "shutting off" their appetite. Using an appetite suppressant such as hoodia as part of a comprehensive weight loss plan, that includes a balanced diet and exercise, may help you to eat less, and force your body to use the fat and energy it has stored to promote weight loss.

The efficacy of hoodia has caused a proliferation of it in the marketplace by supplement and cosmetic companies who use hoodia of substandard quality, in attempt to reap quick profits. It is important to make sure all hoodia comes from reputable sources and is verifiably organic or wild crafted under organic conditions.