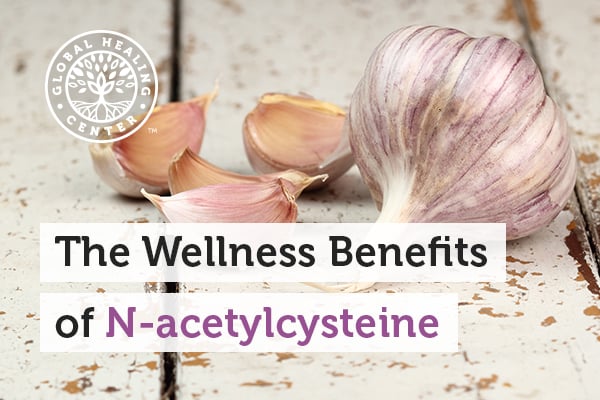 NAC is commonly used as a remedy for acetaminophen overdose. Acetaminophen is an active ingredient in pain relievers such as Tylenol and as many as 78,000 Americans have to visit the emergency room every year because of an acetaminophen overdose. Of these 78,000, approximately 40% are hospitalized.[5] Intravenously administered N-acetylcysteine is an effective way to save these patients.[6]

How N-acetylcysteine Works in the Body

Antioxidants combat harmful free radicals and stop them from causing damage. Free radicals form when oxygen interacts with certain molecules. Once formed, free radicals can start a chain reaction by interacting with important cellular components such as DNA or the cell membrane, causing cells to function poorly or die. This is why antioxidants are important.[7] Without antioxidants, it's difficult for the body to maintain normal function.

You can obtain a solid supply of antioxidants with a diet rich in fruits and vegetables or from supplements. The role of N-acetylcysteine supplementation is to help your body enhance the effect of antioxidants.

When we speak of wellness, we’re referring to proper and normal physiological function of the body. NAC’s role in wellness can be summed up in two words – antioxidant booster. As mentioned before, the role of antioxidants is to combat free radicals that create oxidative stress. Oxidative stress damages cells, proteins, and DNA to the point normal physiological function is inhibited.

In fact, disruption of physiological processes can be severe and even lead to illness.

Antioxidants are vital in the fight against free radical damage and N-acetylcysteine supports that fight.

Related: Learn About A Powerful Antioxidant Known As CoQ10

NAC is also commonly used to support normal reproductive health and has been the focus of research in that capacity for quite some time.

Polycystic ovary syndrome (PCOS) is one of the most common endocrine system disorders in women, affecting 10-20% of reproductive-age women. For women with PCOS, N-acetylcysteine is commonly used to stimulate ovulation – which PCOS tends to disrupt.

Related: Iodine and Polycystic Ovary Syndrome (PCOS): What You Need to Know

In a 2007 study, 573 women suffering from polycystic ovary syndrome were treated with clomiphene citrate for one menstrual cycle. Then, 470 patients were put on an N-acetylcysteine regimen as well for another cycle.

Women are not the only ones benefiting from NAC. Men who are suffering from male infertility can use NAC to support normal sperm parameters. A study published in the medical journal Urology in 2009, examined 120 patients who were diagnosed with idiopathic infertility, or sometimes referred to as unexplained infertility.

Patients were divided into two groups. Those in the group A were given 600 mg of NAC orally for three months. Men in the group B received a placebo.

After three months, men who had been taking NAC had experienced significant improvement in the volume, motility, and viscosity of semen. Serum antioxidant capacity was greater and the oxidative stress index was lower than in the group that received a placebo. These beneficial effects resulted from reduced reactive oxygen species in the serum and reduced viscosity of the semen.[9]

How to Consume N-acetylcysteine

Since NAC is not available in food, you can only take it intravenously or in supplement form. Intravenous intake isn't practical without a visit to the emergency room or hospital. Regular supplementation is the easiest and most convenient option.