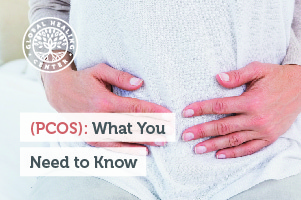 It’s no secret that iodine plays an important role in hormone production and has a special relationship with the thyroid. What’s less discussed is how important iodine is for women’s health. Several organs in the female body contain high concentrations of iodine. After the thyroid, the ovaries contain the second highest concentration of iodine.[1] Thus, it goes without saying that maintaining normal iodine levels is a must for promoting the health of the ovaries. This importance is compounded as research has linked iodine deficiency to polycystic ovary syndrome, also known as PCOS.

Background: The Concern of Iodine Deficiency

Before we look at how PCOS relates to iodine deficiency, it's important to lay groundwork and understand that even though iodine deficiency has long been written off as a third world concern, it exists everywhere, including the USA. [2] Most people don't hear a lot about iodine aside from a periodic glance at "iodized salt." Nice try, but a 2008 study found that less than half of tested table salt met FDA requirements for iodine content. [3] If you're counting on iodized salt to provide all your iodine, you're coming up short.

Environmental toxins and pollutants also contribute to iodine deficiency. Iodine, along with chlorine, bromine, and fluorine, belongs to a family of compounds known as halogens which are all absorbed by the same receptors in the body. Although iodine is beneficial, the others are not. Regardless, most food and water is full of the stuff and ingesting it severely disrupts iodine absorption.

Polycystic ovary syndrome is when cysts form on the ovaries. This happens when the ovaries are not functioning properly and cannot release an egg; often they are producing too many male hormones. [4] Insulin resistance, obesity, genetics... basically anything that disrupts hormone disruption can influence the onset of PCOS; and so does iodine deficiency. [5] [6] When iodine levels are low, thyroid activity is thrown out of whack. If iodine is low in the thyroid, it's a sure bet that the ovaries are also deficient and struggling. Hormone concerns are almost a given. It's no surprise that women with PCOS have a higher incidence of thyroid disease. [7] Women with PCOS are also more likely to have an enlarged thyroid. [8] And, PCOS is the most common cause of excess hair growth in women, nearly three out of every four cases. [9]

Every woman needs to know that it's not only her thyroid that requires iodine, but her ovaries too. And although PCOS has multiple causes, it's clear that getting enough iodine is one of the most important steps a woman can take. [10] A healthy diet that includes foods rich in iodine, and, if necessary, iodine supplementation, are easy ways to get adequate iodine. When supplementing, be aware that there are a wide variety of iodine supplements on the market and some are better than others. I generally recommend nascent iodine.