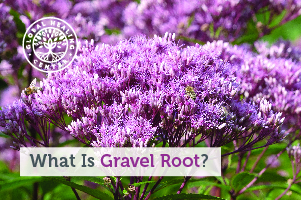 Gravel root, also known as Joe Pye weed, is a therapeutic herb that's been around for centuries. Historical records from Turkey indicate its use as early as the B.C. era. Throughout history, many cultures have used gravel root as a remedy for an assortment of health complaints. Many of the bioactive compounds responsible for gravel root’s benefits are beginning to be analyzed by the scientific community in order to validate the age-old claims.

A Look at Gravel Root

The origin of the name "gravel root" is appropriately attributed to its popularity as an herb believed to break down kidney stones (gravel). While solid, modern evidence to confirm this assertion is sparse; the root itself exhibits a host of compounds that have earned it a high level of praise among naturopaths and conventional physicians alike.

The most potent part of the herb are its leaves, roots, and rhizomes (root-like stems) and contain high concentrations of oleoresin euparin, tannins, flavonoids, and sesquiterpene. [1] All of these play a role in supporting metabolic actions.

Gravel root is believed to offer therapeutic support for a number of health conditions.

Thought to be an antilithic (anti-stone) by Native American Indians, gravel root was traditionally considered an important tool for softening, dissolving, and promoting the passage of kidney stones. Most of the claims surrounding gravel root’s power for reducing kidney stone size have remained anecdotal.

Gallstones form when an excess substances accumulate in the bile, resulting in hard, crystalline stones. Gravel root has been cited by some cultures as able to dissolve existing gallstones and discouraging new stones from forming.

As an Astringent and Diuretic

Nutritional Support for the Urinary Tract

Traditional and conventional uses of gravel root cite its use for urinary tract ailments and bladder infections. Gravel root has also been used in the alleviation of painful bouts of urination (dysuria), possibly due to its soothing, astringent properties on the mucus membranes of the urinary tract.

Although no recent research confirms its efficacy, gravel root was used by primitive tribes to alleviate uncomfortable joint conditions such as gout and arthritis. Excess uric acid buildup in the joints can lead to gout and is also one of the few contributors to arthritis. Gravel root was believed to encourage kidney cleansing and provide an antilithic effect to uric acid crystals.

The most common consumption methods of gravel root today are in the forms of teas, tinctures, and capsules. All types of gravel root preparations are believed to impart the same benefits to the human body. As always, only consume gravel root that's wild crafted or certified organic from a trustworthy source. Unfortunately, there are a lot of low-quality herbs and supplements coming in from polluted supply houses for the sole purpose of capitalizing on some people's complacency when purchasing health-related products. Only purchase supplements from reputable and verifiable companies!