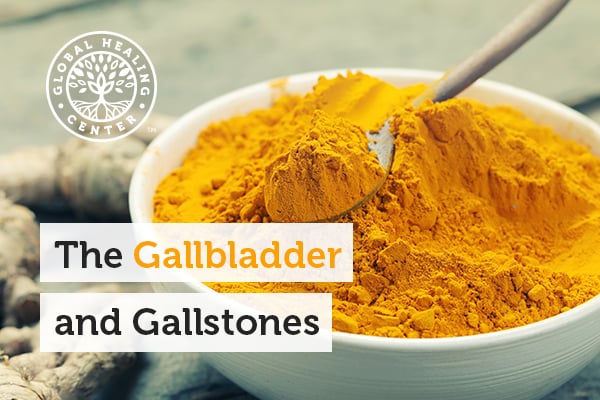 In the United States, gallstones affect at least 20 million people per year. [1] While it's possible to have gallstones and not know it, severe cases can lead to rupturing of the gallbladder and even death. Understanding your gallbladder and naturally supporting it with the right nutrition is imperative for good health.

Located in the upper right quadrant of the abdomen and situated beneath the liver, the gallbladder is a kidney bean-shaped organ connected to the liver by the hepatic duct. The gallbladder works as a storage facility for the pint or so of bile the liver produces every day. The cells of the intestinal walls secrete a hormone called cholecystokinin which causes the gallbladder to contract and send bile into the common bile duct.

What is the Purpose of Digestive Bile?

The gallbladder stores bile until it’s needed, generally after you consume fatty foods. Bile provides a lot of help to the enzyme lipase by breaking down fat into smaller particles and increasing the surface area of the lipids for the lipase to act upon. Bile also breaks down the fat-soluble vitamins A, D, E, and K while promoting the assimilation of fatty acids.

After the bile breaks down the fats, toxins, and dead blood cells, the mixture continues to move through the digestive system. Bile actually encourages this peristaltic action that eventually leads to a bowel movement. In this regard, bile production helps prevent constipation and supports the natural elimination of toxins. Some research suggests bile possesses antimicrobial benefits as well. [2]

Another note about bile... although many people believe bowel movement color is caused by the food they eat, processed hemoglobin from the aforementioned blood cells gives bile its yellow-green hue which mixes with food to create the distinctive color of human waste.[3]

How Do Gallstones Develop?

Gallstones form when too much cholesterol is stored in the gallbladder. This means that poor diet is a main contributor to gallstones. [4] However, it can be argued that both heredity also plays role in the formation of gallstones as scientists at the University of Bonn in Germany discovered a gene that significantly affects gallstone production. [5]

The Composition of Gallstones

Bile consists primarily of dissolved cholesterol, but an excess of cholesterol can lead to small, hard stones forming within the gallbladder. [6] Stones can also be formed by excessive bilirubin or calcium salt buildup in the gallbladder, but these are commonly referred to as pigment stones. Women (especially if pregnant or elderly), Native Americans, and anyone that is overweight have a higher risk of developing gallstones.

It’s common to live with stones without apparent symptoms. However, when a gallstone attack does surface, the crippling pain can last from a few minutes to a few hours or more. The pain usually starts in the abdomen and radiates to the chest, the back, and between the shoulder blades and may be accompanied by gas, heartburn, and indigestion.

If gallstones block the bile duct, the risk of infection increases. If the pain is accompanied by nausea, vomiting, fever, and chills, then an infection has already started. At that point, if it spreads to the liver, jaundiced skin and yellowing of the eyes are close behind.

Gallstones may also block the cystic duct and inflame the gallbladder. When this, a condition known as cholecystitis, happens, pain in the upper right abdomen and left shoulder occurs and brings on a fever. Another concern, gallstone ileus, is caused by a gallstone slipping into the small intestine and blocking entry to the large intestine. Although gallstone ileus can be corrected only by surgery, nutritional support can promote liver health.

What Herbs Aid in Removing Gallstones?

Organic chicory root (Cichorium intybus) has a long and well-documented history of supporting liver health. In fact, the ancient Romans used this herb to help cleanse the blood. Similarly, ancient Egyptians were known to consume chicory root in large amounts to aid in purifying the liver and blood. Roasted chicory root is also well known as a natural, caffeine-free alternative to coffee.

Dandelion leaf (Taraxacum officinale) helps promote bile excretion from the liver so the body can more efficiently metabolize fat. Dandelion Leaf is also effective at stimulating a sluggish gallbladder, which is responsible for storing and excreting bile as the body needs it. As such, dandelion leaf is effective at promoting blood purity and lessening the burden on the liver.

Dandelion (Taraxacum officinale) is a perennial herb native to North America and Europe. You may consider dandelions to be a weed, but their roots are known to help purify the blood and support the liver. Dandelion root also discourages excessive water retention.

Celandine (Chelidonium majus) is often used to assist with liver and gallbladder cleansing. In addition, this herb discourages the accumulation of foreign particles in the liver.

Organic peppermint leaf (Mentha piperita) supports the flow of bile from your liver to the gallbladder. The volatile oil found in peppermint aids the overall digestive process.

Yellow dock root (Rumex crispus) aids in eliminating foreign substances that can overburden the liver. Yellow dock root is also thought to be a natural remedy for include mental "fuzziness", general irritability, skin blemishes, and blood and skin disorders when they occur as a result of inhibited liver function.

With the well known Amazon rainforest plant, chanca piedra (Phyllanthus niruri), healthcare practitioners have a powerful ally in helping their patients experience optimal bladder, kidney, gallbladder, and liver health. Chanca piedra is traditionally regarded as a health supplement that can promote the liver’s normal detoxification efforts. Note that chanca piedra may increase the effects of certain diabetic, high blood pressure, and diuretic drugs. Do not use it if you're pregnant or nursing due to its purgative action. Consult your healthcare provider before taking this or any herbal supplement.

What If My Gallbladder Has Been Removed?

When the gallbladder has been removed, the human body compensates for its absence. The bile duct, found on the visceral side of the liver, will increase in size to take over bile storage. Some patients experience diarrhea, irritable bowel syndrome, and other gastrointestinal disorders whereas others exhibit no post-surgery symptoms whatsoever.

One theory is that bile stored in the bile duct will continually "drip" into the small intestine (even when there is no food present) and cause the intestinal tract to become inflamed. The long-term effect of this irritation is that it may contribute to the onset of colon cancer.

What Diet Is Best For The Gallbladder?

Since cholesterol is one of the main contributors to the development of gallstones, it makes sense to stick with a low fat, low-cholesterol diet. A diet high in fiber can help keep the gallbladder and the rest of your digestive system functioning properly. Foods best avoided include coffee, soda, milk, chocolate, meats, dairy products, and especially those high in sugar.

Can Food Allergies Affect My Gallbladder?

It's possible. J.C. Breneman, M.D., a pioneer in food allergy research, discovered that eliminating allergy-prone foods from the diet can cause gallbladder symptoms to diminish. The allergic reaction to the foods of his patients was found to cause inflammation of the biliary ducts, which in turn restricted the flow of bile and led to increased pain.

How Can I Help Cleanse My Gallbladder?

Having a clean and well-functioning colon is vital to the body’s overall health. For the best health possible, it’s essential to cleanse the liver and the gallbladder to help promote a healthy and strong digestive system. Liver Health is a liver and gallbladder supplement formulated with nine organic ingredients to support the body’s natural cleansing efforts and promote normal liver and gallbladder health.