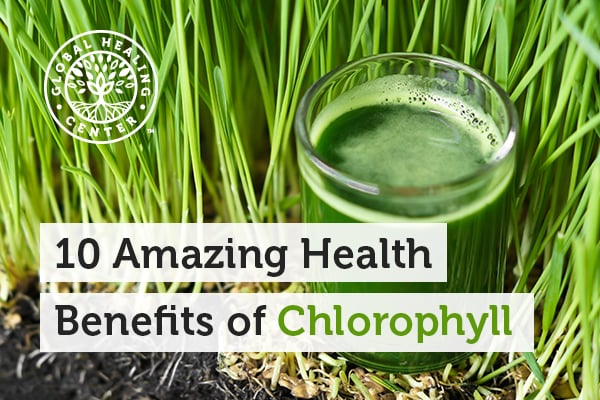 You may have heard a lot of buzz surrounding the healthiness of vegetables, especially leafy green vegetables with deep, rich color tones. In many ways, they're perfect foods and part of the credit is owed to the chlorophyll they contain. Chlorophyll is a green pigment that's instrumental in photosynthesis. It's what gives plants their green color. Research also suggests it's extremely beneficial for promoting good health.

The following 10 benefits demonstrate its amazing versatility and power.

Compounds containing chlorophyll might help suppress hunger, according to research. Twenty moderately overweight women were given test meals on three separate occasions one week apart — two meals with chlorophyll, one without. They reported reduced hunger following the meals containing the chlorophyll and blood tests showed stable blood sugar levels.[1] These results suggest chlorophyll should be considered as an effective way to manage hunger and promote weight loss.

Chlorophyll is good for your body from the inside out, literally. This includes body and fecal odors. When tested in a nursing home with 62 patients, one study reported improvements in the odors emanating from the test subjects. In addition to odor reduction, taking chlorophyll was also associated with less constipation and gas.[2]

The use of chlorophyll to promote the healing process was first reported nearly 100 years ago. One older report published by Butler University — in 1950 — discussed its use for improving healing times.[3] A more recent study found that, when used as a spray, chlorophyll significantly helped wound therapy.[4] The research clearly backs its effectiveness in this area.

Environmental pollutants such as toxic metals can quickly destroy health. Chlorophyll binds with toxic metals to hamper absorption, and research has shown it can do the same with some carcinogens. A crossover study with 4 human volunteers tested chlorophyll’s ability to remove ingested aflatoxin, a known carcinogen. Each volunteer received three servings of the aflatoxin, followed with a meal, the latter two included a tablet of chlorophyll. The results showed rapid elimination with 95% evacuated within 24 hours.[5]

Fried foods aren't just bad for your waistline, they also contain chemicals known to damage colon tissue and the DNA of colon cells. In one study, people who ate fried foods coupled with protective foods, including chlorophyll, were observed to have less DNA damage in their colon cells.[6] Don't take that as just cause to go crazy with the fried foods; the best idea is to avoid them altogether.

Chlorophyll's status as a superfood is due to its nutritional and potent antioxidant properties. It protects cells from oxidative damage by eliminating free radicals.[7] One plant known for its high chlorophyll levels, Conyza triloba, showed very active superoxide scavenging behavior. An in vitro study found this plant was capable of reducing free radicals while reducing cell damage.[8]

Although the research doesn't currently show that chlorophyll is a cancer cure, researchers are excited about its potential as a therapy. One study found men with lower levels of dietary chlorophyll had higher risks of colon cancer.[9] Another study noted it effective at stimulating liver detoxifying enzymes and may protect against other carcinogens.[10] That's a great reason to eat your green veggies!

Candida infection is a big concern for many individuals and can lead to fatigue, depression, and digestive concerns; just to name a few. Research has shown that isolated chlorophyll solutions stops growth of Candida albicans.[11]

Traditional medicine has long used green leaves for infections. With modern approaches that have limited effectiveness and a long list of side effects, natural remedies are getting another look. Studies have found that consuming green leaves reduce swelling and redness in the body, which is linked to many disease conditions.[12]

A modified form of chlorophyll known as chlorophyllin may be highly effective for anemia. By swapping iron for magnesium at the center of the molecule, it provides a bioavailable form of iron the body can use.[13] While scientists may look for ways to develop patentable medicines, no one has to wait to take chlorophyll to gain its benefits.

Chlorophyll possesses an amazing range of benefits and is readily available to everyone. Chlorophyll rich foods are also healthy in their own right and contain essential vitamins and nutrients required for cardiovascular, muscular, and neural health. Consume foods containing chlorophyll or take a dietary supplement for best effect. Blue-green algae is one of my favorites. Wheatgrass, alfalfa, and leafy green vegetables like spinach also contain high levels of chlorophyll. You can also take it as a supplement in powder, drop, capsule, or juice form.