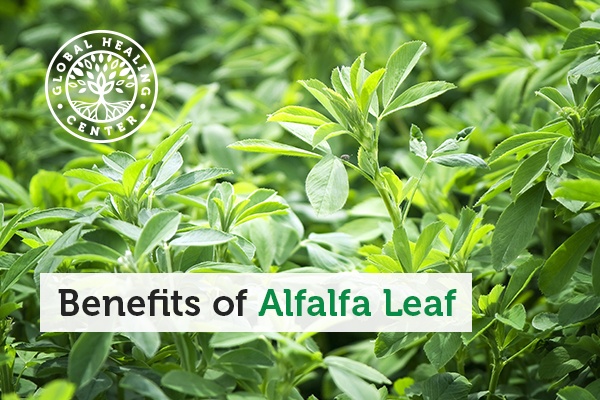 The word “alfalfa” comes from the Arabic phrase, al-fac-facah, meaning "father of all foods.” It stands to reason, alfalfa is extremely nutritious. The extensive root system allows the plant to absorb a high level of nutrients from the soil. Alfalfa leaf contains essential vitamins including the entire spectrum of B-vitamins, A, D, E and K. Alfalfa Leaf is a source of iron, niacin, biotin, folic acid, calcium, magnesium, phosphorous and potassium. Alfalfa is a source of chlorophyll. Compared to other plants, alfalfa leaf is very high in protein and amino acids.

Alfalfa leaves can be healthy for humans and may be used as a dietary or nutritional supplement. The benefits of alfalfa leaf are many and include supporting healthy circulation and the immune system. [1]

History of Alfalfa Use

Remains of Alfalfa leaf have been found in Persian ruins dating back six thousand years and early Turkish writings mention Alfalfa around 1300 B.C.

Native Americans used the seeds as a thickening paste and nutrient additive. Herbal physicians in 19th century America used alfalfa as an ingredient in general tonics. At home, alfalfa seeds were ground into a poultice used to soothe insect bites. Nursing mothers have also used the leaf, which is believed to help stimulate the flow of breast milk.

Alfalfa has been used and appreciated all over the world for centuries. A comprehensive list of its benefits would be very long, but common benefits attributed to alfalfa include: [2] [3]

Because of alfalfa's benefits, it is an ingredient in many supplemental formulas and can even be purchased as a stand alone capsule. The leaves can be brewed into a tea, although the taste is somewhat bland it does combines well with other teas. As a nutritious food, the herb is mild in flavor and works well in salads, soups, casseroles, or more.

Alfalfa is generally safe when consumed by healthy persons but there are situations where caution is appropriate. Some people have experienced a mild upset stomach or lupus like effects. Because of this, persons with autoimmune disease or hormonal cancer should avoid alfalfa. Pregnant women and persons with gout should also avoid alfalfa. Consult your healthcare provider before using alfalfa leaf if you are currently taking any form of medication or dealing with an autoimmune disease.