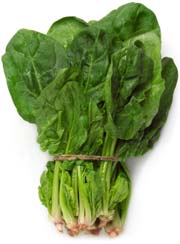 Heated battles have raged across the world’s dinner tables for about as long as anyone can remember. The topic of this unending debate? Vegetables.

Despite their most valiant efforts many parents still struggle with their kids about eating their nightly serving of greens. Visiting your local farmers markets, fresher produce and more interesting/flavorful recipes have been helping to slowly turn the tide, but arming yourself with a little extra knowledge before going into battle doesn’t usually hurt either.

According to newly presented research, eating green vegetables may be an even better way to keep our bodies healthy than we could have possibly guessed [1]. In addition to being a well-known source of vitamins, minerals, and essential nutrients, not to mention both soluble and insoluble dietary fiber, it seems that green vegetables of all types are also a key source of specialized chemical signals that our immune systems use to self-communicate.

Breaking Down the Study

By examining the effects of an artificially controlled diet, completely lacking and green vegetable matter, in laboratory mice, the Barbraham researchers were able to show a marked decline in immune capability over a relatively short span of time. In fact, in as little as two to three weeks, most of their test mice showed a staggering 70-80% reduction in intra-epithelial lymphocytes (IELs) — a fundamental component of healthy immune function in most mammals, including both mice and humans.

Seeing this, the researchers were able to then trace a complex, multistage relationship between specific chemical compounds found in green cruciferous vegetables, IEL cells, and a cell-surface protein, scientifically referred to as aryl hydrocarbon receptors (AhRs). Essentially, they believe that the chemicals found primarily in these vegetables trigger activity in AhR proteins, which in turn seem to at least partially regulate the production of IEL cells throughout the body.

What's more, AhR proteins play their own additional role in immune defense outside of IEL production. While IEL cells are best known for destroying foreign and infectious material to protect their parent organism, AhR also help to maintain intracellular genetic integrity by acting as a sort of glue which holds DNA together and makes it less vulnerable to attack.

What The Researchers Have to Say:

The research team behind this initial investigation is quick to point out that their findings are only preliminary, and have so far only been examined in laboratory animals. A great deal of additional research is still needed to determine whether or not these same chemical relationships fully apply to humans. But we do know for a fact, that consuming more and more green vegetables are definitely a great way to improve your diet.

While these new findings may be a bit abstract for some kids to really sink their teeth into, it doesn’t change the fact there they give us all yet another reason to make sure get in our daily servings of green vegetables — even if they aren’t always our favorite thing on the menu.