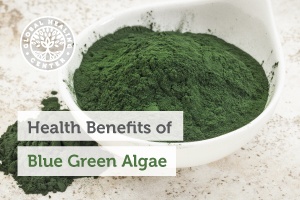 Organic blue-green algae is one of the most nutrient-dense foods on the planet. Two varieties, spirulina and Aphanizomenon flos-aquae, are the most consumed forms of blue-green algae; which has superfood status due to high concentrations of proteins, vitamins and nutrients.[1]

How Is Blue-Green Algae Cultivated?

Most blue-green algae products contain Aphanizomenon flos-aquae harvested from Upper Klamath Lake in southern Oregon. Harvesting is done during the summertime, June to November. The algae is filtered to preserve the most vibrant blooms and then further purified by centrifugation. The AFA is then chilled and sold frozen or dried at low temperatures and sold as a powder.

Blue-green algae is 70% vegetable protein and has higher levels of beta-carotene than broccoli. The one-two punch potency of blue-green algae is that it contains a high concentration of nutrients- over 65 vitamins, minerals, and enzymes and the complete spectrum of eight essential amino acids and ten nonessential amino acids... and they are all easily absorbed by the body. In fact, up to 97% of the beneficial vitamins, minerals, and enzymes found in blue-green algae are easily absorbed (some supplements are as low as 5-25% absorbable). AFA also contains the most biologically active chlorophyll of any known food.

Aphanizomenon flos-aquae is rich in compounds that provide antioxidants. A measurement called the "oxygen radical absorbance capacity" (ORAC) is used to determine free radical scavenging capacity of foods and other substances purported to contain antioxidants. Italy's University of Urbino Carlo Bo applied the ORAC method to edible AFA. The outcome was positive in favor of researchers supporting the use of AFA as a dietary antioxidant supplement to relieve oxidative stress.[2]

The University of Urbino Carlo B conducted another study designed to evaluate the ability of AFA to provide defense against oxidative damage to normal human red blood cells and plasma. Results suggested AFA lowered oxidative damage in both. Furthermore, AFA delayed the depletion of enzymes that are beneficial to the body.[3]

A Japanese study found that a product containing blue-green algae from lake Klamath exhibited considerable antioxidant activity and was an effective adaptogenic; that is, a substance that helps the body adapt to protect against stressors.[4]

There is some controversy over whether or not AFA is an effective source of vitamin B12. Many natural sources of vitamin B12 are biologically inadequate. However, preliminary research conducted by Italy's Department of Neurorehabilitation at Villa Salus Hospital evaluated the vitamin B12 levels of 15 vegan subjects who had supplemented with an algae product from Lake Klamath and found their B12 levels increased over a control group. Although not conclusive, researchers believed the preliminary research supported the argument that AFA is a reliable source of vitamin B12.[5]

In adults, stem cells have the function of repairing damaged cells. Unfortunately, as we age, stem cells have a reduced restorative ability and are more vulnerable to oxidative stress. This results in the body being less able to repair itself. Based on previous studies that showed blue-green algae could modulate immune function in animals, the Department of Neurosurgery at USF investigated the effects of AFA on cultured human stem cells. Researchers noted that preliminary results suggested an ethanol extract of AFA may promote human stem cell proliferation.[6]

Although blue-green algae is commonly consumed in the United States, Canada, and Europe, some concern has been voiced about the potential for the presence of microcystin, a toxic byproduct of blue-green algae. In response, the Oregon Health Division and the Oregon Department of Agriculture have established regulatory limits on microcystin content in BGA products.[7] Additionally, some research has shown a correlation between beta-methylamino-L-alanine (BMAA) — an amino acid produced by blue-green algae — and some neurodegenerative conditions.[8]

As with most products, if you're pregnant or nursing, it's a good idea to first consult your healthcare provider before supplementing with blue-green algae.