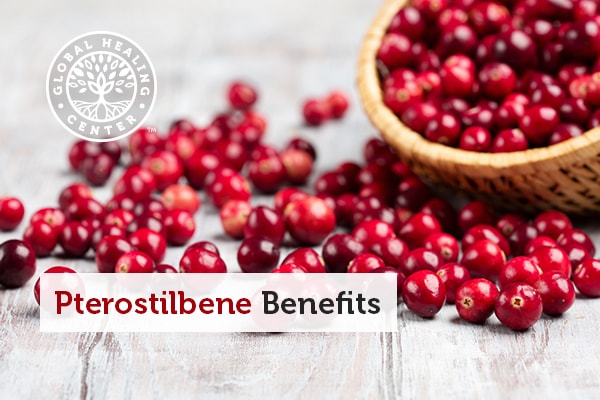 We've all heard about the much-touted health benefits of blueberries, grapes, and other berries, but you may not have heard of the unique compound they contain — pterostilbene. What are the benefits of pterostilbene for your health?

As an emerging antioxidant that's getting a lot of attention, pterostilbene is chemically related to the more well-known resveratrol. However, studies show that pterostilbene may have even more powerful effects!

Pterostilbene (trans-3,5-dimethoxy-4-hydroxystilbene) is a phytochemical (plant chemical) that's produced in response to injury and infection. Research also suggests it might have therapeutic benefits for humans.

Both pterostilbene and its cousin resveratrol are in the same class of molecules — stilbenes. If you want a little chemistry lesson, pterostilbene has two methoxy groups (a methyl — or CH3 — bound to oxygen) instead of hydroxy groups, which resveratrol has. This makes it more "lipophilic" (fat-loving) than trans-resveratrol, and it passes through cell membranes more easily, which is to say it's more bioavailable.[1]

A study on how these two stilbenes affected mice models concluded that pterostilbene helps brain health more than resveratrol.[1] While resveratrol has its perks, the scientists found pterostilbene at higher concentrations in the brain, despite both molecules being fed equally to the mice.[1]

While we don't yet know whether these specific findings apply to people in the same way, it sheds light on how the compound might work.

Pterostilbene is emerging as a major player in anti-aging, heart health, memory building, and boosting overall health. Here are nine reasons to consider adding pterostilbene foods or supplements to your daily regime.

1. Acts as a Potent Antioxidant

Experiments suggest that pterostilbene offers several important benefits. First and foremost, pterostilbene acts as a powerful antioxidant.[2] Adding pterostilbene to your diet can balance out free radicals which cause so-called "oxidative stress" on cells.

Oxidative stress happens when your cells get overwhelmed by things that cause oxidation — think of how an avocado or apple turns brown when exposed to oxygen — that's oxidation! Antioxidants counteract oxidation inside the body, keeping your cells fresh and healthy.

Numerous studies have found that consuming blueberries and other berries — potent sources of pterostilbene — supports already-healthy blood sugar.[3] In one study, 97 adults took Pterocarpus marsupium, a plant which contains pterostilbene, for 12 weeks. At the end of the study, 67 percent of the participants had normal glucose levels.[4]

Researchers have been especially interested in pterostilbene due to its effects on aging. Trans-pterostilbene is a bioactive chemical which supports cognitive health, promotes normal blood sugar, and soothes irritation.[5]

Did you know that pterostilbene protects your DNA?

Pterostilbene also supports your telomeres, which are the protective caps at the ends of a DNA strand. Telomeres naturally start to break down as you age. Amazingly, pterostilbene strengthens the enzymes that protect your telomeres.[6] This means that consuming pterostilbene can help your body's natural anti-aging abilities.

As you age, you may become forgetful, or feel like your brain has lost a little bit of its edge. Although this is a natural part of life, you can take actions to help your brain age normally. Taking pterostilbene supplements or eating pterostilbene-rich foods are two effective strategies.

Studies have found that pterostilbene supports healthy motor function, cognition, and memory at "diet-achievable" amounts.[1] The scientists from one study called this compound a "potent neuromodulator" of aging. In other words, it helps aging progress normally, keeping your brain and nerve cells healthy and strong.

Used for centuries in Indian and Chinese medicine to protect heart health, scientists have since found evidence to back up this ancient use. Specifically, pterostilbene promotes normal levels of high-density lipoproteins (HDL or "good" cholesterol) and platelet aggregation, which supports cardiovascular health.[7]

All of these benefits contribute to a healthier, happier heart. For more ideas, check out our Healthy Heart Tips article.

Pterostilbene may even help with maintaining a healthy weight by supporting normal metabolism. When scientists fed rats a fattening diet and gave them pterostilbene supplements, it lowered adipose (fat) tissue by 15 percent and improved fat burning, emphasizing pterostilbene's potential for promoting a healthy body weight.[9]

In another study by the same researchers, rats that had developed insulin resistance from a fattening diet were fed pterostilbene supplements. Over time, the supplement promoted normal blood sugar and insulin regulation in the rats.[10] Having balanced blood sugar promotes normal weight, whereas wild blood sugar swings lead to weight gain.

Most people can use a little less when it comes to daily stress and occasional anxiety. A study on mice measured the effects of pterostilbene on task performance while under stress. The scientists also measured how the hippocampus and amygdala, two areas of the brain that control anxiety, responded.[11]

Mice that consumed pterostilbene performed better in maze tests, which involve running around a labyrinth and executing tasks.[11] The study also found that pterostilbene resulted in changes to their brains which indicated lower anxiety levels. Interestingly, the effects were most pronounced at servings of 1-2 mg/kg (milligrams per kilogram body weight), and not as effective at larger servings of 5-10 mg/kg.

In life, we also experience all sorts of "maze tests" — and approaching them with a calm mind instead of an anxious one can help us perform our best.

8. May Help With Swollen Joints

When rats with swollen joints were given pterostilbene for eight weeks, they experienced less redness and swelling. The pterostilbene also seemed to reduce the number of "reactive oxygen species" produced in cartilage matrix cells, which means it reduced the oxidative stress experienced by these cells.[12]

There are many naturally-occurring sources of pterostilbene, including the following:[13]

Studies have not found any toxic side effects of pterostilbene. For example, in one study, mice were given 3,000 mg/kg daily — a huge amount — without any harm.[14] Typical blueberries only have about 6mg/kg of pterostilbene, so it was over 500 times the normal intake for humans.

Did you know that pterostilbene doesn't have any toxic side effects?

In a human study, participants were given 250 mg of pterostilbene daily over six to eight weeks and experienced no negative effects on kidney or liver function.[15]

Some people taking it experienced higher appetite and a recent study indicated that a supplement containing both pterostilbene and nicotinamide ribosome might slightly increase LDL ("bad") cholesterol in overweight individuals, but not in those with a healthy body weight.[16]

If you want the health benefits of pterostilbene but aren't sure you are getting enough in your normal diet, or you want a higher serving, a supplement is a great way to get you there.

As mentioned, one study found that "diet-achievable" amounts of pterostilbene from blueberries can support brain health, but those studies have not shown that the amount of pterostilbene typically found in food is enough to elicit its other benefits.

Pro tip: When looking for supplements, always make sure they're plant-based and sourced from the highest-quality ingredients.

Of course, a diverse diet full of brightly-colored fruits and vegetables is always an excellent idea! However, if you need an extra boost of antioxidant-power, a supplement can help.

Since this compound has an excellent safety record,[14, 15] through supplementation, you can safely consume larger servings than what you'd get in berries and other foods. Be sure to seek out the highest-quality supplements sourced from plants, and make sure it contains trans-pterostilbene.

You can find pterostilbene naturally in many anti-aging foods, including blueberries, mulberries, huckleberries, lingonberries, and cranberries, as well as other sources like almonds, rhubarb, and red grapes. Other sources include Chinese water bamboo (bamboo water is now a thing), and narra tree leaves.

Pterostilbene has an excellent safety record, and higher servings have not been shown to produce any adverse health effects in animals or humans. It may be a great option to support healthy aging.

If you opt to take a supplement, I suggest Ultimate Cellular Health, a potent blend of antioxidants and powerful ingredients, including pterostilbene. Cellular Health supports and energizes mitochondrial function while protecting against oxidative stress.

Have you ever tried pterostilbene? What was your experience? Comment below!