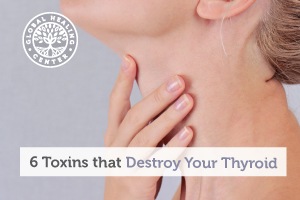 Some people believe that the thyroid is the “heart” of the endocrine system. As one of the largest endocrine glands, it plays an important role in maintaining energy levels and secreting hormones — among other things. When the thyroid’s working properly, it’s business as usual. But unfortunately, toxic chemicals can influence thyroid health for the worst.

Thyroid Toxins to Watch Out For

Toxins are present in our environment, and there’s very little we can do to eliminate all of them. However, we can limit our exposure to toxic compounds, reducing the likelihood of experiencing issues with our thyroid. Supplementing with iodine is also an important step toward protecting your thyroid from toxic compounds. Learn more about six toxins that can harm your thyroid below.

As an endocrine disruptor, BPA can affect hormone levels and throw thyroid function out of whack. Many studies document BPA’s effects on the thyroid in adults and children.[1] BPA can trigger autoimmunity, which is the number one cause of thyroid dysfunction.[2]

Bromine is toxic to the thyroid, but with it in everything from pool cleaner to pasta, finding something without the endocrine disruptor can be tricky.[3] Often, even healthy patients can have high levels of flame-retardant substance in their bodies. Polybrominated diphenyl ethers (PBDEs) are even finding their way into the breastmilk of American women.[4] One common source of bromine is brominated vegetable oil — which is still found in many drinks — so remember, it pays to read those labels!

Studies suggest low thyroid function in mothers is linked to neurodevelopmental complications in children. While BPA — as mentioned above — or any score of toxic chemicals could be the cause of an unhealthy thyroid, perchlorate is definitely one of the usual suspects.[5, 6]

While numerous studies are linking it with thyroid dysfunction, the FDA still approved it for use as an anti-static agent in food packaging. That makes avoiding it a lot more difficult.[7]

When it comes to maintaining a healthy thyroid, avoiding pesticides could also be key.

In India, thyroid disorders are on the rise, but there are measures in place to make sure much of the population has sufficient access to iodine, something essential for thyroid function. One recent study suggested this spike is due to pesticide and other chemical exposure, with experts noting almost 60 percent of cases aren’t connected to iodine-deficiency.[8]

While the idea of pesticide exposure damaging the thyroid is nothing new, maintaining iodine levels and avoiding pesticides could be the perfect combination.[9]

Higher levels of perfluorinated chemicals (PFCs) in the blood could affect thyroid function, particularly in women.[10] Used in the manufacturing of many common things, PFCs can be found in pizza boxes and takeout containers; your mattress might even contain them!

Even though the use of PFCs is being phased out in the U.S., imported products could still be a concern.[11] Endocrine disruptors like PFCs take a long time to break down in the body, so this study is concerning, to say the least.

Almost 70 percent of the U.S. water supply is fluoridated to help prevent cavities. Many people don’t know, however, that fluoride was actually prescribed as a remedy for an overactive thyroid during the first half of the 20th century.

You want to make sure your thyroid is as healthy as possible, so make sure you’re aware of just what can be dangerous. To protect your health, be sure to eat foods that support thyroid health as much as you can. While your family history can also play a role in endocrine issues, avoiding toxic exposure is a smart way to go.