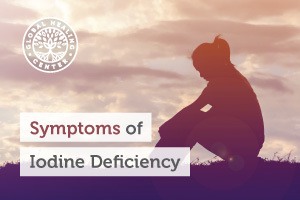 Iodine deficiency is a global health issue. The World Health Organization (WHO) estimates over two billion people may be iodine deficient, with up to 50 million of them suffering from serious symptoms of iodine deficiency, such as brain damage.[1] Once a rare concern in the Western world, this imbalance is on the rise in North America.

This may be related to modern industrial agricultural practices and a lack of minerals in the soil.[2] Environmental pollutants have robbed the soil of nutrients, and this translates into poor iodine content in foods.[3] Iodine is especially necessary for pregnant women, their unborn babies, and young children; a deficiency can lead to developmental issues.[4, 5, 6, 7]

Iodine deficiency symptoms manifest as a result of improper thyroid hormone production.[8] In other words, when the thyroid gland does not receive enough iodine, trouble ensues. The more serious signs and symptoms of iodine deficiency may vary from one person to the next but usually include the following:

Other Symptoms of Iodine Deficiency

Studies have shown the correlation between the shortage of iodine and cognitive function. In fact, one study from 2009 found that iodine supplementation in mildly-deficient children helped improve their perceptual reasoning.[9]

A lack of iodine can lead to a reduced ability to convert food into usable nutrients.[10] This may lead to a sluggish metabolism, weight gain, and constipation.

The thyroid and immune system are linked, so when the thyroid doesn't get enough iodine, the immune system is weakened. This can cause individuals with symptoms of iodine deficiency to experience more cases of the cold and flu.[11]

Due to the relationship between iodine and hormone balance, an iodine deficiency disrupts hormone receptors and communication. This may lead to emotional imbalances, anxiety, and a lack of sexual interest.[12]

A study reported in the Canadian Journal of Surgery found that 70 percent of patients given iodine supplements showed an improvement in their fibrocystic breast disease.[13] This lead to speculation on if there's a correlation between iodine deficiency and breast cancer, although more research is required. It is known, however, that there is a connection between a lack of iodine in women and breast tenderness that accompanies the menstrual cycle.

Because of iodine's role in organ health, iodine deficiency may affect the detoxification abilities of organs and even lead to organ failure.

Researchers are looking into potential correlations between iodine deficiency and breast and stomach cancers. Preliminary studies show that iodine deficiency may produce an increased incidence of cancerous malignancies in animals. Similarly, other research shows a possible relationship between iodine levels and gastric forms of cancer. These studies offer hope, as both show a decreased rate of cancer development when the animals are given an iodine-prophylaxis supplement.

If you decide to meet your daily requirements of iodine with a supplement, be advised that not all iodine supplements are the same. I recommend using a nascent form of iodine, such as Detoxadine®.

Everything You Have to Know About Iodine