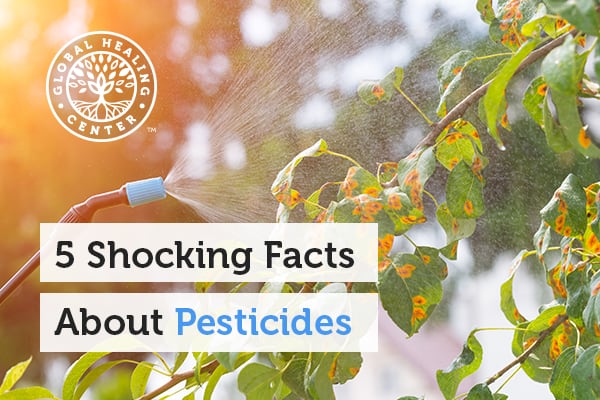 Pesticides are an increasing concern among populations all across the world. Even organic food, which is grown without the use of chemical additions, are suffering from the effects of pesticide overexposure. Not only are they harming our food, our bodies, and our environment, many pesticides may be nonessential when it comes to keeping crops safe from insects. Here are some of the shocking facts about pesticides that everyone should know.

Pesticide Facts You May Not Know

1. The EPA is in Denial About the Dangers of Pesticides

One type of pesticide, known as organophosphates, are endocrine disruptors and neurotoxins. One of the most common, Dow Chemicals' Chlorpyrifos, is in use on major food crops across the US and is, in fact, the second most common pesticide residue found on food, despite being a serious health hazard and being banned in household cleaning products since the early 2000's. Over 5 million pounds are sprayed each year. Three recent university studies, spanning up to 14 years in duration, have proven Chlorpyrifos causes organ damage, mental disorders, learning disabilities, autism, and affects IQ. The EPA is aware but turns a blind eye. [1]

As more volatile, poisonous pesticides come to use in conventional and GMO crop fields nationwide, organic and family farmers are fighting an uphill battle to shield their unadulterated produce from the massive drift that often occurs from neighboring farms. [2] Fortunately for the organic movement, recent preventative programs are being launched, such as the educational/organic registration website by Purdue University called DriftWitch in which twelve states participate.

A common theme you'll find with pesticides is that one will be developed, used extensively, damaging health effects will emerge, and then the scientists will say, "Oops, guess we goofed there, let's not use that one anymore." The concern, or one of the concerns, is that pesticides tend to be persistent organic toxins, meaning they linger. Researchers at Washington State University conducted a study looking at Methoxychlor, a pesticide banned over ten years ago. They found that a person alive today could be suffering from kidney disease, ovarian and reproductive disorders, and obesity simply because their great ­grandparents were exposed. [3] An exposure “drift” of disease up to four generations makes it quite apparent that chemical toxins are practically abundant in most people today.

The University of Colorado's recently conducted a long-term study to look at statewide pesticide exposure in connection with occurrence rates of Parkinson's disease and a significant correlation was revealed. [4] Researchers tracked atrazine – a common pesticide used across the US – via groundwater records. Along these records, it was found that Parkinson's rates surged from 4 to 40%!

5. Pesticides are Endangering the Monarch Butterfly

Unbeknownst to most Americans, monarch butterfly populations have declined an alarming 90% in the past 20 years. Their winter habitat in Mexico has declined from 45 acres in 1996 to just 1.7 acres in 2013. Monarchs feed on milkweed plants, but the concern is that milkweed plants are found in corn fields and the toxic pesticide glyphosate has wiped it out. Like bees, monarch butterflies are a major pollinator of crops and are an integral component of food crop sustainability.