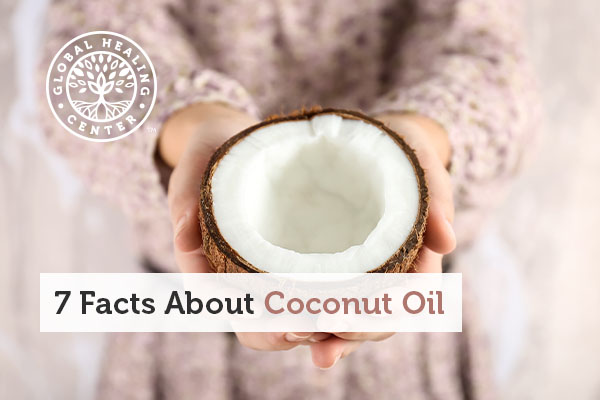 Cultures and countries across the world use and appreciate the coconut tree. Because of its nutritional and therapeutic values, it's referred to as "Kalpavriksha" (the all-giving tree) in India. As the name implies, the coconut palm is exceptionally versatile and used in many capacities. Everything from the coconut water to the leaves to the kernel hull supports human health.[1] Coconut oil, specifically, has become quite popular.

Let's look at a few facts about coconut oil that you might not know.

1. The Saturated Fat in Coconut Oil Isn't All Bad

Many people are confused when they see coconut oil at the grocery store, read the nutritional label, and notice the high saturated fat content. "What gives?" they think, "I thought this stuff was healthy?" Well, it is.

Unfortunately, the fat in coconut has been the subject of misinformation. Although we're told that saturated fat, across the board, is bad, the saturated fats in coconut oil are medium-chain fatty acids. They're different than saturated fat from animal sources and do not degrade within the body. In fact, the human body uses them directly as energy. Coconut oil consumption is even associated with normal lipid levels.[2, 3]

Coconut oil is better than other vegetable oils like sunflower or safflower oil. Those oils contain polyunsaturated fatty acids, which aren't good for the cardiovascular system. Many nutritional experts recommend switching to coconut oil to avoid health risks.[4]

2. Coconut Oil Is Great for Hair

A staggering amount of shampoos, conditioners, and hair care products contain coconut oil.[5] The reason is quite simple. With its low molecular weight and straight linear chain, coconut oil can effectively penetrate the hair shaft to reduce protein loss, leaving it nourished and healthy.[6]

Coconut oil can moisturize the skin.[7] In many cultures, it's used as a remedy for skin conditions.[8] The reason? Its chemical structure. The fatty acids are nourishing to the skin and even encourage wound healing.[9]

Perhaps one of the most amazing things about coconut oil is how potent it is against harmful organisms.

5. Can Replace Milk in Ice Cream

Everyone loves ice cream, but not everyone is keen on the milk fat used to make it. What's the alternative? Bland, fat-free ice cream? Maybe not. It seems that virgin coconut oil may be an acceptable replacement for milk fat in ice cream. Those who have tried it claim that the ice cream has a pleasant coconut flavor and an excellent appearance, texture, and aroma.[14]

Did you know that giving massages to newborns has been found to improve thermoregulation and encourage healthy weight gain? A 2005 study evaluated the effect of coconut oil on the growth of newborns. Starting on the second day of their lives, an oil massage was given four times a day by a trained person until the baby was discharged. The mothers then continued until their baby was 31 days old. The results? Those babies experienced healthy weight gain and growth.[15]

It might be premature to call coconut oil an antidote for poisoning, but a 2005 incident in Iran certainly suggests that it may have something to offer. Hospital officials there reported of a young man who had ingested a pesticide. Upon admittance to the hospital, he experienced severe indications of toxicity and given several counteractive substances, including charcoal, sodium bicarbonate, magnesium sulfate, and coconut oil. The result? He survived, and the coconut oil was described as an important part of the protocol.[16]