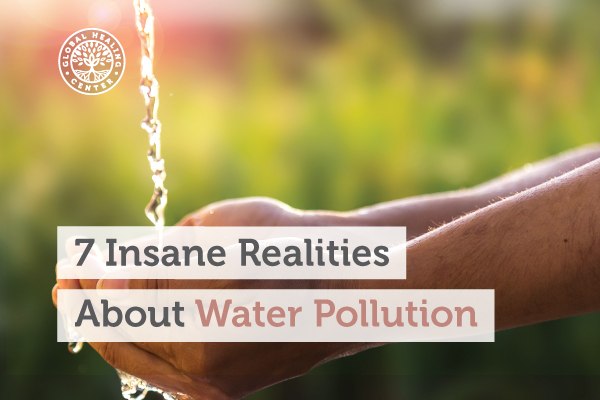 Remember that classic Saturday Night Live skit about Swill drinking water? Well, what was originally meant to be tongue-in-cheek might not be too far off. A recent study in Canada noted that decades of industrial pollution is leeching calcium deposits from lake soil and replacing it with acid. [1] This acidic environment, along with reduced oxygen levels driven by climate change has caused native plankton to die and Holopedium, a jelly-like species of plankton that doesn’t require as much calcium, has moved in and literally made the water appear gooey. It's very possible this invasion will affect drinking water reserves. [2]

2. Polluted Drinking Water Has Been Linked to Stillbirth

It seems that in the 60s, residents of certain Massachusetts towns were unknowingly drinking and bathing in a poison from the coatings sprayed in water pipes. The toxin wasn’t discovered in the water until 1979 simply because no one expected it to be there. The toxin in question, tetrachloroethylene, or PCE, was found by the Boston University School of Public Health to cause a higher risk of stillbirth. [3] [4] Shockingly, PCE is still used in dry cleaning and linked to cancer, memory concerns, and birth defects.

3. The Amish May be Part of the Concern

No one is pointing fingers here. We’re all part of the pollution concern – even, oddly enough, the Amish. It turns out some Amish communities aren't properly storing or collecting manure, and because of that, high levels of nitrates and E. coli are building up in Amish water wells. The EPA has warned that over 85 percent of Amish farms were in violation. [5] In addition to their own drinking water, the Amish community may be unknowingly polluting the Chesapeake Bay. In 2007, Lancaster County in Pennsylvania, a large Amish community, produced over 61 millions tons of agricultural waste. To put it into perspective, that’s more than six times what most other counties in the area produced! [6]

4. Well Water Can be Loaded with Arsenic

Even "low dose" arsenic exposure can lead to cardiovascular issues. Another study even suggested high levels of exposure to arsenic poses an even greater risk among smokers. [7] [8]

5. The Penalties for Polluting Water Can be Abysmally Small

Often times the penalties huge industries face for wrong doing is laughable. The abysmally small fines companies have to pay for harming the environment tend to be more like a cost of doing business than a deterrent. Take the recent case of DuPont, a chemical giant. In 2010, the company was responsible for a series of chemical leaks, one that even led to the death of an employee. The fine? $1.3 million. [9] Pretty small for one of the largest corporations in the world. [10]

6. Environmental Safety is Not a Top Priority at the EPA

A recent watchdog report found that the EPA is not consistently enforcing regulations surrounding industrial pollution, and these toxins are finding their way into our waterways via sewage plants. [11] The agency hasn’t even updated the list of regulated sewage plant chemicals since 1981! It’s not all the EPA’s doing though; some of the blame falls with our government. Recently the House blocked portions of the Clean Water Act. [12] Hopefully things will change on that front, as it is our water and our future generations that are at stake here.

7. The Battle for Clean Water Can be Literal

America has its concerns with water pollution but at the very least, most of us have the ability to turn on the tap and have relatively clean water at a moment's notice. Not everyone in the world is so fortunate. In some places, like Iraq, there is a literal battle over resources, especially clean drinking water. [13]

You can't put your head in the sand and pretend water pollution doesn't exist or affect you, you have to actively protect yourself. I recommend drinking pure distilled water and adding raw organic apple cider vinegar. Avoid water in plastic bottles as it can contain BPA.