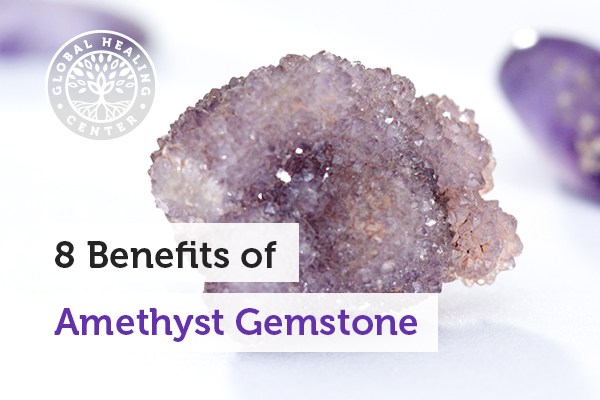 Amethyst gemstone offers certain benefits for body detoxification and health. This gem provides benefits similar to tourmaline, such as far-infrared radiation and negative ion emission. While the benefits of amethyst gemstone are controversial, many applications of this stone are beginning to regain popularity. If you’re wondering how amethyst can improve your health, then please read on!

What Is Amethyst Gemstone?

Amethyst is a popular and relatively rare form of quartz. It’s a fairly hard gem and can be found within geodes all across the globe. Amethyst is usually available in crystal form or as a mass. Its lovely purple color may come from trace amounts of iron or manganese in its crystal lattice. Many stones on the market are not naturally colored; they are often heat treated to produce a darker shade of purple.

Throughout history, the purple, lilac, and lavender amethyst crystal have been associated with royalty. The crystals have also been used for a variety of health conditions throughout the ages, ranging from alcohol addiction and sleep disorders to pain and mental dysfunction. While research has yet to conclude that amethyst actually helps decrease symptoms associated with these health issues, emerging data displays amethyst as a powerful compound possibly helpful for detoxification.

How Can Amethyst Help You?

Amethyst produces small but detectable of magnetic fields.[1] While high levels of magnetic fields are dangerous (particularly from electronics), the naturally-occurring magnetic fields from amethyst may actually produce favorable results in the body. Since the human body has its own magnetic field, proponents believe that amethyst interacts and exchanges energy with the body.[2] The stone also absorbs and reflects far-infrared radiation, a type of long-wavelength radiation.[3] Although controversial, far-infrared radiation is currently being studied for a variety of health benefits for the human body. Eight of these health benefits include:

Far-infrared radiation is known to support healthy cell growth and regeneration. Scientific studies have shown that increasing infrared radiation may correspondingly increase energy levels in the body. This increase in energy is designed to promote the growth of healthy cells, possibly aiding in whole body growth.[4] Currently, the majority of experiments that verify these findings have been conducted with animals; however, results indicate that similar activity may occur in humans.

We also know from experiments with animals and humans that far-infrared regulation may modulate sleep patterns. The low level of heat emitted by amethyst crystals may help provide a sense of calm for the body, possibly providing favorable effects for supporting a healthy sleep cycle.[4]

Blood is not the only bodily fluid that improves in circulation ability in response to far-infrared radiation. The radiation increases the motility of lymph fluid and may support normal fluid balance in tissues.[6]

Almost everyone has heard the buzz about antioxidants, and most of the population is aware of the general health benefits associated with these natural compounds. Research indicates that exposure to far-infrared radiation may increase antioxidant activity within certain foods.[7]

Last but not least, science shows that far-infrared radiation may aid in inhibiting bacterial growth by hindering the actions of certain growth-promoting enzymes.[9] Scientists have found that it is far-infrared radiation specifically, and not merely the heat, which inhibits the growth of some bacteria in the body. Regular heat therapy doesn’t seem to offer the same effect.

These are only a few of the many possible benefits of far-infrared radiation via amethyst gemstone. Now, let’s turn our attention to the negative ions found in amethyst. While the term “negative” might indicate harm, these ions are actually essential for promoting our health.

1. Removing Toxic Particles from the Body

Negative ions appear to attract toxic particles. Studies have indicated that the size of the particles doesn’t matter.[11]

If negative ions have the power to draw out toxic particles from the body, it may aid in respiration by removing these particles from the lungs.[12] This could aid those with occasional congestion or other respiratory concerns. More research is needed, especially on humans, to find conclusive evidence for this benefit.

Negative ion emission can remove dangerous chemicals like aerosol from the air and your body.[12] Protecting your body from the potentially hazardous compounds is crucial for supporting health.

How to Use Amethyst

Look, I know that the practice of using gemstones for healing is a highly controversial one. If you don’t believe in the healing power of amethyst, that's fine, but I would recommend you keep an open mind. I do believe in the healing power of amethyst. It’s why I keep a large amethyst geode in my office, and it’s why I include amethyst in Global Healing’s Detox Foot Pads™ — the only foot pads on the market today to use genuine gemstones, like amethyst and tourmaline to help draw toxins out of the body.