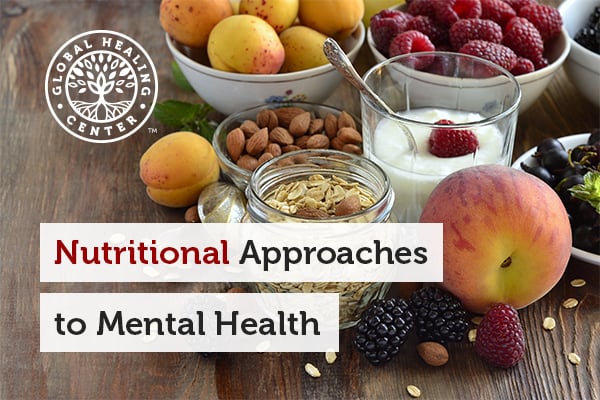 Food nourishes both the body and mind, offering the nutrition required for keeping the whole self energized and functioning at its best. You might — or might not — be surprised to learn that the brain is actually the first site that receives incoming nutrients. It makes sense, since it is the organ that directs the other organs, cells, and metabolic processes.

So what happens if we're nutritionally deficient; can it affect the brain? While nutritional deficiencies do not always exhibit grand mental or psychological symptoms, lesser subclinical indications can pop up. Minor deficiencies of certain nutrients are sufficient enough to change mood and brain chemistry, especially in sensitive individuals.

Antidepressants, including natural anti-anxiety herbs like St. John's wort, may not be enough to alleviate depressive-like symptoms in people who have underlying nutritional deficiencies.

Holistic medicine is an approach that addresses the whole self by incorporating nutritional, biological, genetic, emotional, and mental aspects of wellness. When dealing with mood disorders, all of these aspects must be taken into account. One angle often taken is the use of herbs like kava kava and St. John’s wort.

Some herbs are seeing a great deal of research from reputable scientific organizations, all demonstrating positive results in promoting a positive mood and mental agility. Some herbs, vitamins, and nutrients that promote mental wellness include:

Psychotherapy and conventional medical therapies are often more successful when the patient is thinking clearly and is in a positive mindset (or "mood set"). By increasing certain nutrients and utilizing natural approaches, like St. John's wort and kava kava, mental health may be improved dramatically when combined with conventional therapeutic approaches.

A Closer Look at Nutrition and Depression

The Standard American Diet (SAD) is typically low in many of the nutrients our brain (and the rest of our body) requires to stay healthy. A diet high in processed carbohydrates and low in essential fatty acids is common among many people today, and this nutritional factor may be impairing the quality of the mind and body in adults, teens, and children.

Individuals do not often understand or even think about the importance nutrition plays in mental health. With many people currently overfed and undernourished, it's no wonder why we are seeing a constant bombardment of disease and mental disorders plaguing our Western world. Here's a quick overview of the nutrients that are crucial for mental health.

Neurotransmitters like dopamine and serotonin are necessary for transmitting electrical impulses and messages between brain cells. These essential electrical conductors are also important for keeping mood elevated. Decreased amounts in the brain can result in depression or depressive-like symptoms. Many conventional antidepressants work by promoting normal neurotransmitter levels, an action that is also attributed to St. John's wort.

Amino acids are the precursors for many neurotransmitters, and the majority of us receive all the amino acids we require from dietary protein. The three amino acids that are directly linked to mood and depression include phenylalanine, tyrosine, and tryptophan. Phenylalanine and tyrosine produce norepinephrine and tryptophan, two neurotransmitters necessary for maintaining a stable mood.

Some research has indicated that amino acid therapy may be as effective as traditional drug approaches to mental wellness, with phenylalanine and tyrosine being two of the amino acids demonstrating similar antidepressive results compared with a popular pharmaceutical.[5] Amino acids have also been shown to reduce pain levels in the body by maintaining healthy levels of endorphins, the body's natural pain reliever.

Thiamine is necessary for converting glucose (blood sugar) into fuel for cells in the brain and body. Without this conversion, the brain can't access its preferred energy source, and symptoms like fatigue, depression, impaired thinking, irritability, and anxiety can manifest. Memory loss, lack of appetite, and insomnia are also symptoms related to vitamin B1 deficiency.[6]

There is a strong correlation between B6 deficiency and depression, as this nutrient is also necessary for creating neurotransmitters.[7]

Vitamin B12 has seen a lot of attention in recent years, often heralded by many as a powerful energy enhancer and mood booster.

This vitamin, derived primarily from animal sources, is important for red blood cell formation. Without it, pernicious anemia can result,[8] a condition that leads to mood swings, irritability, paranoia, confusion, anorexia, and depression.

Another B vitamin, folate also assists in the production of neurotransmitters. Deficiencies of this vitamin can lead to anemia, resulting in the same mental symptoms related to B12 deficiency.

Orthomolecular psychiatrists have used folic acid (folate) supplements for years to reduce the frequency of memory lapses in dementia patients, and some research suggests that the vitamin may be helpful for lifting mood.[9] Eating foods rich in folate is a way to maintain healthy folate levels.

The benefits of vitamin C are often related to its antioxidant capabilities, one of the leading contributors to brain protection.

If you take a single 3-gram dose of vitamin C, you might experience mental health benefits. Vitamin C is water-soluble and must be consumed every day.

People with depression often show lower levels of vitamin D compared with individuals displaying little to no symptoms.[10] While this is a mere correlation, other studies have consistently replicated this relationship.

Sunlight, the main avenue through which natural vitamin D is produced in the body, has been associated with regulating serotonin and melatonin levels in the brain, and one study indicated sunlight as a potent mood and cognitive enhancer for depressed individuals.[11]

There are around 15 minerals that are essential for human health, with 5 of them being crucial for maintaining mental agility. While all nutrients work synergistically to create a dynamic state of health, the following nutrients have seen the most research in relation to mental and emotional stabilization.

Both sodium and potassium work together to maintain electrolyte balance in the body, and too much or too little of these nutrients disrupt this balance.

When nutrient balance is disrupted, neurotransmitters are directly affected, producing symptoms related to depression. Long-term use of diuretics can lead to a deficiency of potassium, an issue that can also manifest depression symptoms.

A deficiency of iron can result in anemia, a condition that can produce symptoms such as depression, attention and focus disorders, fatigue, and irritability. Iron produces energy in the cerebral parenchyma in the brain and is essential for neurotransmitter production.

Children with ADD/ADHD are often deficient in iron, making it a possible nutrient helpful for promoting proper focus and concentration.[12] A deficiency of iron has been known to cause mental fatigue and depression in some individuals.[13] You can combat iron deficiency with foods rich in iron.

Most diets today are deficient in magnesium, a mineral largely found in vegetables, nuts, and seeds. Magnesium plays a role in hundreds of different workings in the body, including chemical mechanisms within the brain.

A deficiency may result in depression, anxiety, and confusion, not to mention an array of physical issues. Kidney disease, high blood pressure, and malabsorption issues may increase magnesium deficiency risk. [14]

Studies have indicated that hypercalcaemia, or high calcium levels in the blood, is associated with mental health disorders.[15]

Hypercalcaemia has also been shown to increase the levels of magnesium excretion in the urine, further enhancing the risk of developing depression and other mental health issues.[16] Because so many people are low in magnesium but get enough calcium, the often-touted 2:1 ratio is too high. It's best to get calcium and magnesium in a 1:1 ratio.

A deficiency in zinc frequently leads to depressive thoughts, emotions, and actions, as zinc is critical for improving cell signaling in the brain. Zinc is found in high amounts in the brain, and studies have shown significant improvement in mood symptoms with individuals supplementing with the mineral.[17]

Zinc is more bioavailable in meat compared with vegetable sources, as meat lacks phytates that impede the nutrient's absorption. Supplementation with zinc is often recommended for vegetarians and vegans for this reason.

Other Nutrients for Brain Health

Supplementation with omega-3 fatty acids and probiotics may be helpful for some people looking for nutritional support for mental wellness. Omega-3 fatty acids, often found in seeds (flaxseed and chia seeds being the prime examples), as well as olive oil and algae oil, helps regulate brain function.

Also, considering that the majority of our serotonin is found in the gut, it's no wonder why so many studies have explored probiotics' role in promoting a healthy mood and mental performance.[18]

Mental health is influenced by a multitude of factors, including diet, lifestyle, and genetics. Nutritional deficiencies related to depression and concentration issues contribute to many of the psychological diagnoses being attributed to people today, yet very little is being done to look into these root causes.

Prescribing a pill to cover up symptoms seems to be the most popular route; however, it doesn't have to be this way. If you or someone you know has some type of mental health condition, it is best to undergo a complete nutritional analysis to determine and remedy any possible underlying factors.