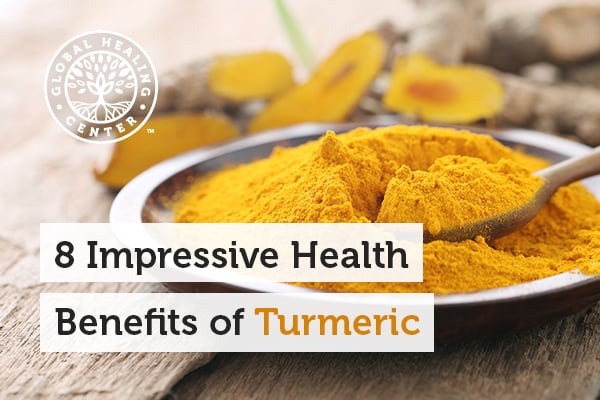 Turmeric, also known as Curcuma longa, is an ancient spice that has remained popular in India and Asia since 2,000 BC. The spice is a prized component of the culinary traditions of these cultures. Turmeric belongs to the ginger family, and its roots impart a vibrant, yellow hue to curry dishes. Its color is so rich that turmeric root is also used as a natural dyeing agent for cloth.

Curcuminoids are the main phytochemicals that give turmeric its impressive and wide-ranging health benefits. Amazingly, over 9,000 medical and clinical research studies have evaluated turmeric and curcumin and yielded a wealth of positive information.

These nutrients interact with biological pathways and support various body systems, including the brain and neurological system, cardiovascular system, tissue health, and more.[1, 2]

Turmeric contains an abundance of antioxidants that support cellular health. But what does that mean for you? Here are some of the most well-researched benefits of turmeric and the curcuminoids that it contains.

Could turmeric be a potential new option for stabilizing mood?[3] A fascinating study reported promising results with turmeric for supporting a balanced mood. One group received curcumin daily, while the other received a placebo.

After eight weeks, the group that took turmeric had better mood and anxiety test scores compared to those who took a placebo.

Cut your finger? Curcumin may accelerate the wound healing process by soothing irritation and oxidation. As more research evaluates turmeric's ability to support the body’s natural healing abilities, it could lead to its use for a variety of new applications.[4]

Turmeric may ease knee discomfort according to a study where people who took turmeric experienced relief on par with more conventional options. The turmeric group also enjoyed more relief from joint stiffness, and further, reported fewer side effects than those following mainstream treatments.[6]

A review of how curcumin influences blood sugar and diabetes found that it promotes normal blood sugar and insulin sensitivity.[8] It appears to interact with the production of adiponectin, a hormone that regulates blood glucose levels.

Curcumin positively influences insulin-producing cells within the pancreas to help balance blood sugar. It also promotes a normal response to inflammation, which otherwise contributes to the development of diabetes.

Turmeric can soothe excess irritation and promote a normal response to inflammation. The swelling response is a healthy and natural mechanism the body uses to usher soothing compounds during times of crisis or repair. But most people in today's toxic, stress-laden world are under constant pressure. The tissues in the body become irritated, red, and swollen as a result.

A review of studies noted the soothing effect of turmeric is likely exerted through its ability to inhibit enzymes that cause irritation.[9, 10]

A clinical study published in Phytotherapy Research set out to determine the effectiveness of turmeric for active joint discomfort. One group received the standard-of-care medication while the other received turmeric. Patients were given symptom score sheets to assess results. According to these self-assessments, turmeric outperformed the other option on all levels and was relatively free of side effects.[11]

Turmeric's ability to encourage normal lipid profiles has been studied since the 1990s. Some studies show an impressive reduction in lipid profiles for turmeric-supplemented groups. In one study, group participants were given either curcumin from turmeric in small or large servings; a control group was given vitamin E only.

After just seven days, small servings of turmeric produced the most favorable and balancing effects on lipid profiles.[12] Most importantly, these studies show that turmeric is consistently safe and has a very low risk of side effects.[13]

India has used turmeric in curry dishes as a taste and color enhancer for centuries. One reason for its longstanding popularity is because of its soothing properties on digestion. Researchers tested the protective effects of turmeric on the stomach lining against acidic substances that normally would induce stomach ulcers.

When turmeric essential oils were administered first, they protected the stomach and reduced damage. Turmeric also appears to offer relief for stomach ailments.[14]

There are a lot of turmeric supplements on the market; some better than others. Only purchase organic products from reputable companies. Because turmeric is so popular, you'll find many low-quality products produced under questionable circumstances. You can, however, feel confident with our organic liquid turmeric extract. It contains black pepper with piperine for optimal absorption of turmeric, and the feedback we've received is incredible!