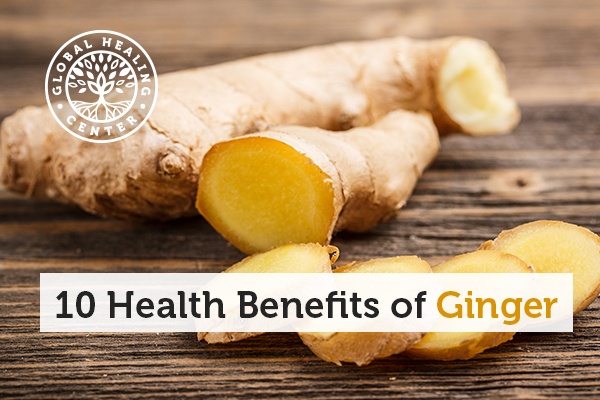 Earlier this year, I had a day where I experienced a sore throat and sinus irritation. I didn't reach for a box of any over-the-counter remedy. Instead, I juiced a fair amount of ginger and lemon and added it to a tea. I was very satisfied with the relief I felt. My experience was nothing new; ginger, or ginger root, has been cultivated and used therapeutically for thousands of years.

Traditional medicine systems all over the world have applied ginger to a wide range of ailments, including calming an upset stomach. Recent studies of ginger have confirmed this effect and much more. Let's take a look at some of the amazing benefits of ginger.

Ginger has also been used historically for flatulence, constipation, bloating, and other digestive complaints. In addition to these gastro-protective effects, researchers have found ginger to be effective for stress-related ulcers.[3]

Ginger contains compounds that have demonstrated protective effects for the brain. One of them, known as 6-shogaol, inhibited the release and expression of redness-causing chemicals which damage neurons (nerve cells).[4] Another ginger compound, 10-gingerol, similarly acted in an anti-neuroinflammatory manner. In other words, fresh ginger's 10-gingerol reduced redness and swelling in the brain.[5]

In a clinical trial, 100 patients received ginger powder or a drug given to migraine sufferers. The results showed the ginger powder helped reduce migraine related discomfort without side effects.[6]

Ginger has repeatedly demonstrated powerful blood sugar balancing effects. It acts on insulin release and sensitivity and supports the metabolism of carbohydrates and lipids.[8] Insulin levels may noticeably lower with ginger supplementation.[9] In addition to its effectiveness as a blood sugar stabilizer, ginger has also shown powerful protective effects against diabetic kidney, eye, and liver complications.

Thai medical practitioners have traditionally used herbs such as ginger to support healthy blood pressure. Extracts from ginger and other herbs used in therapeutic recipes were evaluated for their effectiveness against hypertension. The ginger extract was the most effective.[10]

Ginger can be used to relieve muscle discomfort in female athletes. After taking ginger for six weeks, athketes taking ginger saw a significant decrease in muscle soreness as compared to the placebo.[13]

One of the active compounds in ginger, 6-gingerol, has been isolated, tested, and determined to be an active factor in supporting cardiovascular health. Based on the results, researchers are exploring the potentials of ginger as a remedy for cardiovascular concerns.[14]

Ginger has an extremely robust flavor which makes consuming it a little bit tricky. It might be too strong to ingest on its own, but as I mentioned, it mixes incredibly well into tea or fresh juice. It also makes a great ingredient in many recipes, and you can find it in some healthy snacks.