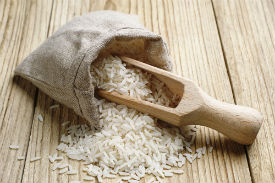 Good news for diabetics: Rice has been found to have varying glycemic indices.

How Does Diabetes Affect Blood Sugar?

For persons with type 2 diabetes, managing their blood sugar is an important daily task. Type 2 diabetes is a condition where the body either doesn’t produce enough insulin, or ignores it. When food is digested, insulin is what carries sugar from the blood to be processed as energy. If blood sugar builds up and gets too high, diabetic complications may result.

One way to stabilize blood sugar is to eat a low GI (glycemic index) diet [1], meaning foods that are digested slowly and don’t cause blood sugar spikes. Simple sugars, like candy, are high GI, digested quickly and cause blood sugar levels to peak. This can be dangerous for diabetics.

Many natural foods are known for being low GI, such as cabbage, mushrooms, green beans, and vegetables. Carbohydrates are generally the element most responsible for varying blood-sugar levels and it can be a tricky balance to provide the body with nourishment without upsetting blood sugar levels.

A recent study has found, however, that many varieties of a classic dietary staple are low GI [2].

New research from the International Rice Research Institute and CSIRO’s Food Futures Flagship recently published that most varieties of rice have a low to moderate GI; and they also discovered the gene in rice that determines its glycemic index.

The study found that the GI of rice ranges from a low of 48 to a high of 92, with an average of 64, and that the GI of rice depends on the type of rice consumed. As a point of reference, low GI foods are typically those measured 55 and less, medium GI are measured between 56 and 69, while high glycemic index measures 70 and above.

Diabetes is a concern for many people and getting a variety of nutritious foods in their diet is a must. It's encouraging to have another food option to add to a well-balanced diet. Especially rice, which is incredibly versatile and popular.

However, with respect to the study, I was concerned by the mention that the discovery of the glycemic index gene had rice breeders enthused by the, “opportunity to develop varieties [of rice] with different GI levels.” It’s unfortunate that a positive discovery into the makeup of food has some researchers chomping at the bit to get in the lab and, “make it better.”

The study found that there are many varieties of rice that, in their natural, unprocessed, unmodified state, already qualify as a sensible food. Is it necessary to genetically modify or breed new rice? Why not just leave it alone? GMO foods aren’t good and as history has shown, the process of giving mother nature some unrequested help can be a slippery slope with unintended consequences.

My hope is that everyone, not just those with type 2 diabetes, incorporate healthy, organic, and natural foods into their diet.