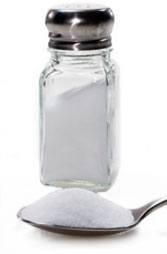 Earlier this year, the American Heart Association (AHA) called for a nationwide reduction in daily salt intake, along with tighter government and industry regulations regarding the levels of standard table salt (Sodium Chloride) found in everyday foods.

The AHA’s previous suggestion – set forth in the U.S. Dietary Guidelines for Americans back in 2005 – called for a maximum upper limit of 2,300 milligrams of salt daily [1]. Most experts now believe that this figure is much too high for the average person, and have lowered the official recommended limit to 1,500 mg per day.

Readily accepted estimates hold that the majority of people consume about twice this newly prescribed amount (roughly one and a half teaspoons of pure salt) each day as part of their regular diet. The bulk of this coming from pre-packaged and restaurant foods. While it’s no secret that the standard American diet is less than ideal, these figures are still cause for concern.

The Side Effects of Excessive Salt

In addition to high blood pressure or hypertension, increased heart attack risk, stroke, and kidney failure are all well known side effects of an increased daily intake of salt. The medical costs of treating these, and other conditions related to excessive table salt intake, also takes a serious toll on our collective pocketbooks.

Current research suggests that by lowering our daily salt intake to match the new 1,500 mg AHA recommendation could reduce mortality due to stroke and heart disease by as much as 20 percent, and save the nation upwards of $24 billion in health care expenses annually.

It’s also important to keep a close eye on the quality of salt that goes into your body, not just the quantity. Hidden toxins found in processed sodium chloride, or table salts, are often overlooked by even the most diligent of consumers. Even sea salt, and other so-called natural forms of sodium, may contain tag-along contaminants simply because they are gathered from polluted sources.

These tag-along contaminants typically include impure forms of iodine, as well as sodium ferrocyanide, and magnesium carbonate. The latter of which is known to depress function of the central nervous system and trigger cardiac disturbances, especially in larger servings.

Besides cutting back on restaurant and other “convenience” foods, which are well documented sources of sodium, the best way to avoid these less obvious hazards is to use only unprocessed salt that is naturally free of environmental toxins when cooking at home. And even when using a top-quality salt, it’s still important to limit your daily salt intake.

Ralph Sacco, M.D., president of the American Heart Association:"Americans deserve the opportunity to choose how much sodium is in the food they eat. By supporting measures that will reduce sodium in the overall food supply, we are giving consumers the freedom to select foods that could allow them to meet sodium recommendations and improve their ideal cardiovascular health."

Himalayan crystal salt is among the purest in the world. Not only is does its remote, isolated source ensure that it is free of pollutants, but because it’s gathered and processed, and organically packaged entirely by hand, it’s guaranteed to be safe when it reaches the dinner table.

Unlike other forms of salt, which can be toxic to the body, Himalayan crystal salt contains 84 minerals and rare trace elements that actually have many benefits for us.