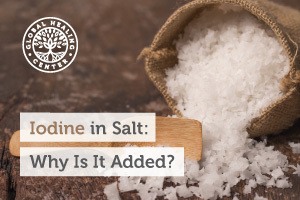 Most kitchen cupboards in the United States probably contain a box of iodized salt. Most salts sold in supermarkets display on the label, "This salt supplies iodine, a necessary nutrient." But do you know why the iodine in salt is added?

Tiny amounts of several different iodine-containing salts are added to table salt since the common American diet provides very little. Iodized Salt can be damaging though.

Everything You Want to Know About Iodine?

Iodine was added to salt around 1924, at the request of government initiatives, due to the growing need for regulation of iodine deficiency disorders. In the 1920s era in the United States, the Great Lakes and Pacific Northwest region of the country experienced high incidences of goiter, a common thyroid-malfunction-based condition involving a large swelling on the neck. Soil levels were extremely low in iodine, and people weren't eating enough iodine rich foods.

Researchers at the University of Michigan decided to copy a Swiss practice of adding iodine to cooking salt, in order to attempt to remedy the concern. Goiter occurrences dropped drastically as a result, and the practice soon became standard [1].

In fact, due to the successes seen in Michigan, iodine-enhanced salts were sold by the Morton Salt Company for the first time, on a national scale. Regulations committees saw that it would be easy to take a simple and cost-effective measure to prevent this health imbalance, and for about $0.05 per person per year, salt became iodized.

Salt was used as the carrier for iodine because it was an easy, spoil-free method of getting iodine into the food chain. Salt is a food that almost everyone eats throughout the day. Iodized salt was also added to animal feed, as it also offered thyroid support benefits for livestock as well.

So, Why is Iodine in Salt Bad?

Things have changed since the 1920s with the manufacturing of toxic chemicals and more cost-effective ways of harvesting salt. Most of the salt harvested then was natural salt from the sea or from natural salt deposits and contained the beneficial trace mineral iodine.

Table Salt or "Iodized Salt" is not a healthy naturally occurring rock, crystal or sea salt. It is a manufactured type of sodium called sodium chloride with added iodide.

Iodine in salt available at grocery stores, restaurants, and in practically all processed foods, have synthetic chemicals added to them. These chemicals may include manufactured forms of iodide, sodium solo-co-aluminate, fluoride sodium bicarbonate, potassium iodide, anti-caking agents and aluminium derivatives. Unfortunately, most table salt is unhealthy and should never be considered as a source of healthy iodine.

Salt found in nature is not usually white. It is often pink in color, such as Himalayan Crystal Salt which is harvested in pristine mountains and naturally dried in the sun.

Of course, we need this iodine because the thyroid gland requires it for making thyroxine (T4) and triiodothyronine (T4), two key hormones for metabolic function. Commonly consumed forms of iodine include potassium iodate, potassium iodide, sodium iodate, and sodium iodine. Each of these forms of iodine enables the thyroid gland to create T4 and T3 hormones.

Using iodine-fortified table salt may still put you at risk for micronutrient deficiencies. A study done at the University in Texas at Arlington, and published in the journal Environmental Science and Technology, found that salt alone cannot prevent iodine deficiency [2].

The research looked into iodine levels in over 80 types of commonly-sold iodized salt brands and found that 47 of them (over half!) did not meet the U.S. Food and Drug Administration's recommendation for healthy iodine levels. Moreover, with time, iodine levels tend to decrease in salt products that are left in humid conditions. The study concluded that only about 20% of the so-called "iodized" salt sold in stores has enough of the micronutrient to be considered enough for daily level acquisition.