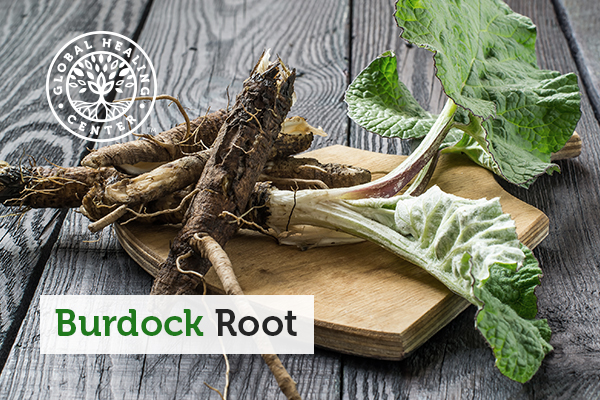 Today, more and more people are discovering the health benefits of burdock root, particularly for skin, digestion, and detoxification. What's more, you can enjoy this little-known gem as a tasty root vegetable!

Burdock has some interesting Trivial Pursuit or Jeopardy facts surrounding it. If you've ever removed a sticky round burr from your clothing after hiking through the forest, there's a good chance you've encountered seeds of the burdock plant. Burdock's ingenious mechanism for seed dispersal was the inspiration for Velcro.[1] However, the plant's roots, not the seeds, pack the most powerful health benefits.

What Is Burdock Root?

Burdock (Arctium lappa) is a big-leaved biennial plant with purple, thistle-like flowers. Native to Asia and Northern Europe, you can find burdock plants growing throughout the world. Its many uses are gaining popularity in the United States and beyond. In homeopathic circles, you may have seen burdock sold as lappa.

Burdock root is an underground tuber that you can use as food or as a medicinal herb. In Japan, people use burdock as a food source in many dishes and call the root gobo. The root is crispy with a sweet, earthy flavor that resembles celery.

You can use burdock root to improve your health and well-being since it is rich in essential nutrients, minerals, and antioxidants.[2]

Traditionally, people used burdock root for a number of ailments, including joint discomfort, sore throats, respiratory infections, and skin-related conditions. Today, research also points to its powerful ability to boost your immune system and so much more.[3] Read on!

One study looked at how the Amish take care of burns; they apply a mix of therapeutic herbs and then wrap the burn in burdock leaves — which have many of the same biological compounds as the root.[4]

Did you know that burdock leaf acts as an effective remedy for wounds or burns?

The researchers found this practice resulted in no infected wounds, no "trauma" when changing wound dressing, and minimal or no discomfort.[4] Researchers concluded that the burdock dressings were an effective alternative to conventional burn care.

Burdock may have antibacterial properties. Studies have documented that compounds in burdock repel certain harmful organisms.[5] Burdock root contains chlorogenic acid (which also happens to be a component of green coffee beans); this compound reduces redness and swelling — not to mention, it also promotes normal blood glucose levels and fat metabolism.[4]

Over time, toxins build up in your body from the foods you eat, water you drink, and air you breathe. These toxins, as well as exposure to UV light, can cause your cells to generate free radicals that oxidize or damage cells. The build-up of these toxins and the resulting cell oxidation can lead to systemic redness and swelling in your body, which, in turn, causes discomfort — and may lead to a host of other ailments.

As an antioxidant, burdock root can stop toxins and free radicals from wreaking havoc on your body.

Burdock root contains antioxidants and other bioactive compounds that counteract free radical damage in your body. Besides chlorogenic acid, scientists have isolated arctigenin (a lignan, if you know your biological compounds) and arctiin as two major bio-active components in burdock root that reduce redness and swelling.[4, 6]

Whether you have dry skin, acne, eczema, or psoriasis, the properties in burdock root make it a great choice to make your skin glow![7] Burdock's active ingredients promote blood circulation, pushing blood to the surface of the skin[2] — which make it look supple and younger-looking.

If you're looking for healthy, glowing skin, give burdock root a try!

No need to search for the fountain of youth — research shows that burdock root can lead to healthier-looking skin.[8] Whether you take it in a capsule, tea, or extract — or you eat burdock root for dinner — its effects work from the inside out. Some studies have found it helpful when applied topically, as well.[8]

Burdock root is low in calories, with just 72 calories per 100 grams. But that's not what makes it helpful in managing body weight.

Compounds found in burdock root may boost your metabolism and improve weight loss!

One study found that taking burdock promoted normal body weight in rats, and also had fat-reducing properties in human cells in vitro.[8] According to the study, "These results suggest that burdock root is expected to be useful for body weight management."[12]

A number of studies have looked at how burdock root affects the harmful and excessive growth and spread of cells in the body. Burdock root acted against liver cell masses in vitro (in a lab study on cells), and prevented them from growing.[13]

The lignan arctigenin in the root has been shown to work against harmful breast tissue cells as well.[14]. Overall, burdock root may have positive effects on overall health and longevity by keeping cells in a healthy state.

The inulin in burdock root is a natural dietary fiber that is not absorbed or digested by the stomach. It acts as a prebiotic, which means food for beneficial bacteria found in your gut. Once burdock (and the inulin it contains) moves through your intestines, probiotics (friendly bacteria) use it to flourish. And the helpful gut microbes keep your digestion working well.

Did you know that burdock root acts as a prebiotic? This helps probiotics thrive in your gut.

Burdock root has been used in traditional Brazilian medicine for centuries for the digestive system.[15] That therapeutic benefit now has scientific evidence to back it up. At least one animal study showed that burdock root might soothe digestive disorders by thickening the colon wall and reducing redness and swelling.[15]

7. Natural Diuretic for the Kidneys

Burdock root is a diuretic which can increase urine output, making it a natural alternative to water pills if you should need a temporary reduction in swelling.[4, 6]

Diuretics stimulate and detoxify your kidneys, helping to promote fluid balance and cleanse your body of waste.[2] Burdock root also deters harmful organisms that are sometimes associated with kidney and urinary discomfort.[16]

Watch out! Burdock root may be your new go-to for liver health.

It's well known that alcohol is bad for your liver. Avoiding alcohol altogether is ideal, but if you do partake in occasional alcohol, certain herbs and foods may cleanse your liver.

A second animal study found burdock root improved several markers of liver health caused by drinking too much alcohol. These markers include glutathione and cytochrome P450[18] — a substance that increases in heavy drinkers and activates bad chemical reactions in the body.[19]

Whether you want to eliminate the dry scalp that causes dandruff or stop hair loss, burdock root is an effective tool to add to your hair care arsenal.

Burdock contains fiber, essential fatty acids, and vitamins that are all good for healthy hair, but scientists have pinpointed the antioxidant lignan arctiin as the biological component that may promote hair growth and prevent hair loss.[20] People use burdock root oil for dry scalp, itching, and dandruff, though there are limited studies on its effectiveness.

10. Acts as a Natural Aphrodisiac

If you're looking to boost your libido, look no further than burdock root. The plant extract has long been used as a natural aphrodisiac to stimulate sexual drive and response — benefits that have been verified scientifically, as well.[21]

In one study, burdock increased testosterone and several components of sexual performance in rats.[21] The researchers credited burdock's diverse array of flavonoids, saponins, lignans, and alkaloids for this effect.

How to Use Burdock Root

Burdock root is versatile and can be used in a number of ways, depending on your personal preference and reason for using it. If you want to consume it as a vegetable, look for it in the produce section. If you can't find it, look at an Asian market.

Many people drink burdock root in tea, which you can find online or in specialty markets, including health food stores or Asian markets. You can also take burdock capsules filled with the root powder or take it in liquid extract form.

Always look for high-quality, organic extracts. You can purchase these in your local health food store. It is best to avoid alcohol-based extracts.

You can use the roots raw as a salad vegetable, or cook them in stir-fries as you do carrots. Burdock root doesn't require much seasoning; cooked and sliced, it can be enjoyed with salt and drizzled with olive oil, or with a healthy vegan dip.

You can purchase dehydrated burdock root herbs — which may contain just the root or other plant parts — or make them yourself. Once dried, you can steep it in tea, add to a recipe, or grind and add to a capsule.

You can purchase pre-prepared burdock root tea or use dried roots you've harvested yourself.

Burdock root is chock-full of important nutrients, including vitamin A, vitamin C, vitamin E, and B complex.

One serving of burdock root can contain nearly 4 grams of dietary fiber.[22]

While the use of burdock root is generally safe, it is important to exercise caution and use responsibly. Here are a few known side effects.

Whether you are looking for a natural remedy for a particular ailment or want to support and improve your overall health, burdock root is a popular and versatile option to consider.

The roots can provide nourishment and healing, particularly for long-term chronic illnesses caused by redness and swelling. Other health benefits include promoting healthy skin and hair, detoxifying the kidneys and liver, helping digestion, and limiting the growth of bad cells or harmful organisms.

Burdock root is generally safe for most people, so try it out and see how it helps your health and well-being.

Have you tried burdock root? Do you have any favorite recipes? Share your story below!