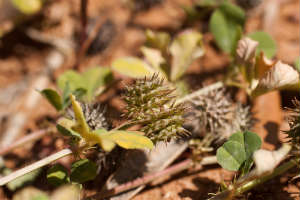 In Ayurvedic medicine, plants and extracts are used as herbal remedies for a multitude of health concerns, including sexual disorders. For this, Tribulus terrestris is one of the preferred herbal aphrodisiacs. [1] The use of Tribulus terrestris is not limited to India, as the therapeutic plant has been a staple of traditional and folk medicine in Turkey, China, and other countries. Used to enhance energy, stamina, and sexual function, Tribulus is believed to stimulate the libido and support normal testosterone levels.

How Does Tribulus Terrestris Work?

Tribulus contains a compound called protodioscin. Protodioscin is a precursor to testosterone production and is also thought to dilate blood vessels. Dilated blood vessels allow for greater blood flow. When more blood is able to reach the penis, more healthy and full erections may result. Many animal studies involving Tribulus terrestris have repeatedly demonstrated its ability to normalize testosterone levels and reduce the occurrence of impotence.

The Effects of Tribulus Terrestris in Animal Models

When The National University of Singapore evaluated the effect of Tribulus terrestris on rabbits, it was reported that testosterone and DHT levels increased. Some have interpreted this as evidence for its usefulness in mild to moderate cases of erectile dysfunction. [2]

Researchers at the All India Institute of Medical Sciences administered an extract of Tribulus terrestris to sexually sluggish male rats and observed increases in the frequency of erection. [3] After conducting a similar experiment, improvements in sexual activity and erectile function were also reported by Korea’s Sungkyunkwan University. [4]

Additionally, Tribulus terrestris may work in tandem with other herbal aphrodisiacs and energizers. A study performed by the Department of Urology at Gyeongsang National University School of Medicine in Korea found that a combination of Tribulus terrestris and Calendula officinalis helped improve erectile function in animals. [5]

As is the case with most herbal remedies, the formal medical community has been slow to form a consensus on whether or not Tribulus can increase human testosterone levels above normal ranges. However, regardless of the uncertainty, researchers in the Department of Urology at Italy’s University Federico II of Naples evaluated a natural compound containing Tribulus terrestris. The study, which involved a hundred human males who took the supplement daily, reported that after two months, patients reported improved sexual function and quality of life. [6]