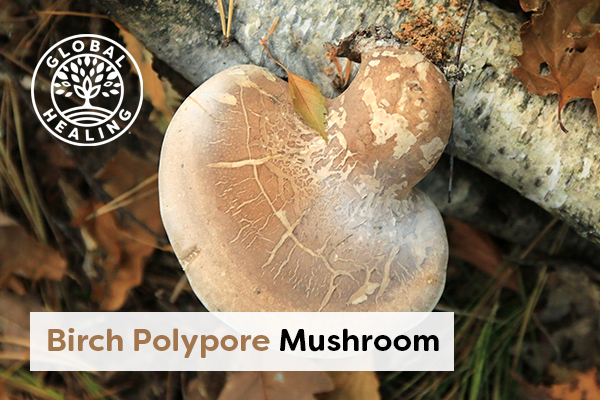 In 1991, scientists discovered a 5,300-year-old mummy named Ӧtzi the Iceman in the Italian Alps. Amazingly, some of Ӧtzi’s possessions were preserved along with him, including a leather pouch with supplies for his mountain journey. What was in the pouch? Tools, weapons, and pieces of a birch polypore mushroom.[1, 2]

Why has this mushroom withstood more than five millennia of use? Far from just a tasty ingredient in your favorite recipe, edible fungi like the birch polypore mushroom offer a wide variety of health benefits — from immune system-boosting to soothing the gut to providing a boost of energy. Let’s dig into some of the ways this fantastic fungus can improve your health and wellness.

What Is the Birch Polypore Mushroom?

Also known as birch bracket or razor strop, the birch polypore mushroom got its name because it grows from dead birch wood, but not on living trees.[3] Scientifically, it’s called Fomitopsis betulina (formerly Piptoporus betulinus). The mushroom’s tough and woody fruiting body — the cushiony-looking part of the mushroom that grows out of wood like a pancake — is usually tan or greyish-brown in color.[3]

As with other bracket fungi mushrooms, the birch polypore’s fruiting body is kidney-shaped like a shelf or bracket.[3] Its mycelium, the threadlike tubes that branch out on a fungus, are white and downy.[3] They're called "polypore" mushrooms because they have many small pores on the white undersurface where the spores come from. After the mushroom releases its spores, the undersurface turns black and is no longer good to use or eat.

You can find these unique mushrooms in northern temperate forests throughout North America, Europe, and Asia.[3] Cultures around the world value them both as a source of nutrition and as an herbal remedy.[3] Some believe that tea made with the fruiting bodies can strengthen the weak and soothe the stressed.[4]

The birch polypore also contains essential fatty acids, including alpha-linoleic acid, oleic acid, and palmitooleic acid, as well as agaric acid that was traditionally used to stop harmful organisms.[5] Mushrooms, including this one, are some of the few plant-based natural sources of vitamin D.[5]

Modern science supports the traditional use of the birch polypore mushroom to promote wellness. Ӧtzi the Iceman (not to be confused with Wim Hof the Iceman) was onto something!

Benefits of the Birch Polypore

The birch polypore mushroom contains bioactive substances that can provide benefits throughout the body. Here are some of those benefits.

Birch polypore mushroom extract can cause a strong increase in the release of interferon-gamma (IFNγ), a cytokine that helps your immune system respond to invaders.[6] Birch polypore also protects monocytes, white blood cells made in the bone marrow.[6]

Birch polypore extract appears to boost the secretion of interleukin-8 (IL-8), a substance that promotes immune cell growth. The bottom line is that the birch polypore can support a healthy immune system.

A healthy digestive system is key to overall wellness, so it’s important to provide yours with nutritional support. People have long used the birch polypore mushroom as an herbal remedy for gastrointestinal concerns. It promotes regular bowel movements and can even ease stomach discomfort.[5]

Mushrooms, in general, help keep your gastrointestinal system balanced. They can act as prebiotics, providing beneficial bacteria in your gut with fuel and food. Having enough of the right kinds of good bacteria prevents other microbes like Candida albicans yeast and harmful bacteria from going overboard. This maintains gut balance and protects against illness.[7]

What gives the birch polypore mushroom the ability to deter harmful organisms? This mushroom is so rich in bioactive substances that it’s hard to pinpoint which one is behind this particular health-boosting power, but experts believe it could be its triterpenoids.[3]

When harmful cells begin to grow in the body, they can be hard to stop. Studies suggest that the birch polypore mushroom contains substances that may help to prevent the proliferation of these harmful cells, namely its triterpenes.[5]

Extracts made from birch polypore mushroom can stop the proliferation of harmful or irregular cells. This can keep them from multiplying and spreading.[5] These extracts appear to counteract harmful cells affecting the skin, colon, and prostate.[5]

Ways to Use the Birch Polypore Mushroom

There are several ways to reap the nutritional and wellness-boosting benefits of the birch polypore mushroom. Here are some of them.

While you can harvest fresh mushrooms from the wild, we recommend you should never attempt this unless you’re accompanied by an expert mushroom hunter and taxonomist who can identify them for you. Many edible mushrooms bear a strong resemblance to other, poisonous varieties, and harvesting the wrong one could be deadly.

Dried birch polypore mushrooms are another option for use. The dried mushrooms can also be made into a powder that can be dissolved in liquid or put into empty vegetarian capsules. Make sure to buy organic supplements from reputable companies who take care with their supply chain and production process.

You can make birch polypore immuno-enhancing tea by steeping fresh or dried mushrooms in hot water. You may also dissolve mushroom powder in water to make tea.

In the tradition of infusions, herbal extracts made with birch polypore provide healing benefits in a concentrated form. You can find extracts or infusions of birch polypore alone or an extract with other ingredients. I recommend Global Healing’s Immune Boost formula, a Raw Herbal Extract™ featuring birch polypore along with elderberry, echinacea, olive leaf extract, and another mushroom — enokitake.

Ӧtzi the Iceman knew what he was doing when he packed his pouch with birch polypore mushroom pieces. This fantastic fungus grows on birch trees and has been used for thousands of years to support wellness.

The birch polypore mushroom may boost the immune system and soothe gastrointestinal issues. It can also deter harmful organisms and prevent damaging cells from proliferating. And birch polypore mushrooms might be able to reduce redness and swelling throughout the body, thus promoting a normal response to inflammation.