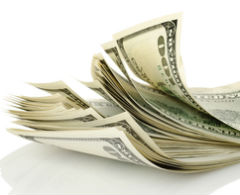 According to a report recently released by the Washington-based group Safer Chemicals, a pro environmental lobby made up of green businesses, health care advocates, and citizen activist groups showed BPA contamination of the U.S. paper money supply.

Bisphenol-A, the infamous chemical that has been banned from baby bottles in Europe and Canada, is a well known component of the thermal-printed receipts most people stick in our wallets or purses after shopping. This constant proximity has allowed trace amounts of the compound to permanently leach into circulating dollars, and ultimately, onto our unsuspecting hands.

Researchers tested receipts and dollar bills from twenty states, as well as Washington D.C., to see if BPA is found. They found high amounts of BPA on 11 of the 22 receipts. They also found BPA on 21 of the 22 dollar bills tested!

The American Chemistry Council argues that the amount of BPA measured on U.S. currency was physiologically insignificant. And to some extent, they are correct.

The small amount of BPA found on paper money is of comparatively little concern when stacked against other sources, such as plastic food packaging and thermal receipts. But according to researchers, the real reason these findings should have us worried is they showcase the compound's ability to soak into porous material like paper, or as other studies suggest, skin.

Ericka Schreder, scientist and lead author of the report:

"Our findings demonstrate that BPA cannot be avoided, even by the most conscious consumer. This unregulated use of large amounts of BPA is having unintended consequences, including exposure to people when we touch receipts."

Why the Concern Over BPA?

Since the late 1950s, Bisphenol-A has been used widely in the manufacturing of certain types of plastics and epoxy resins. As of a few years ago, global production exceeded 2 million tons annually.

The vast majority of this was used in the creation of polycarbonate plastic – the clear, durable plastic commonly used in everyday items ranging from eyeglasses and DVDs, to dental fillings, and of course, baby and water bottles.

Scientists have been aware of BPAs potential risk since shortly after it was developed in the 1930s. Over the decades, particularly the last two, the substance has come under increasing scrutiny due to its possible hormone and neuro-chemical disturbing effects on humans. BPA has been linked to a wide range of increasingly common health concerns, including early onset of puberty, mental instability and depression, diabetes, and several forms of cancer.

The Solution to BPA Exposure?

The concern with Bisphenol-A is not its damaging effects on the human body, but rather its ubiquity. Despite a growing trend in recent years among North American and European manufacturers to develop BPA-free products, the compound is still found practically anywhere you turn your head.

"BPA on receipts, dollar bills, and in many other products, is a direct result of the absurdly lax controls on chemicals in the United States. The 112th Congress should make reform of the failed 1976 Toxic Substances Control Act a top legislative priority to protect American families for generations to come." [1]

Considering one of the compound's historic selling-points is its ability to make plastics stronger and longer lasting, this probably isn't going to change any time soon. Until global regulatory measures are in place, making better consumer choices is probably the quickest route to reducing BPA exposure [2].