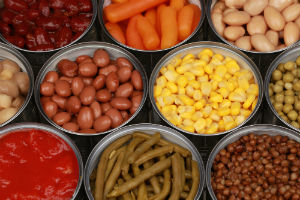 BPA, or bisphenol-A, is an endocrine disruptor you've heard me mention before. It's been shown to mimic hormones in the body – namely estrogen – and contribute to hormone imbalance. These dangers have been known for a long time. You'd think that spawn change to eliminate the use of BPA, right? Wrong. According to a new survey of over 250 brands of canned food, nearly 50% of respondents still use BPA in their products. [1] Around 109 of those surveyed did not respond, so the number of offenders may be even higher.

The Dangers of BPA

Because of its numerous uses in products like food packaging, dental sealants, and even paper receipts, BPA is ubiquitous in the environment. Virtually everyone on the planet has trace amounts of BPA in their body at any given time. Research into BPA has found that the chemical compound has links to cardiovascular disease, cancer, and even obesity. [2]

Food manufacturers are not required to disclose that they use BPA in the lining of their canned foods, so it can be challenging at times to discern between brands that do contain the compound versus those that don't. Generally, BPA-free labels will give it away, but be aware that the substitutes used to replace BPA may be just as bad. BPS, or bisphenol-S, is a common replacement that has been shown to promote similar health effects.

What Can I Do?

In order to reduce your BPA and BPS consumption, the best thing would be to eat more whole foods and become less reliant on processed or packaged foods. Make your meals from recipes that only use fresh, whole, living foods, and ditch foods that come in boxes, cans, and jars. If you are going to use a processed food that has the BPA-free label, contact the company to make sure they're using safer substitutes for BPA. If you haven't ever cleansed your body, the 9-step body cleanse may be helpful for reducing toxic compounds like BPA.