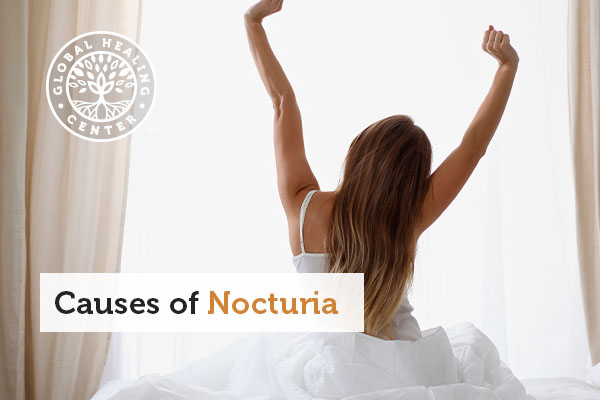 Nocturia, the need to wake from sleep and urinate at least once a night, can lead to serious health complications. It may also indicate a serious, pre-existing health condition. Affecting both men and women of middle-age and older, nocturia should not be ignored or written off as "normal."

The sleep disturbances caused by nocturia can lead to a myriad of complications that significantly affect quality of life. Inadequate sleep resulting from nocturia can cause depression. [1] Sleep disorders can cause physical health to suffer by way of dizziness, hypertension and increased sedentary lifestyle. This increased feeling of fatigue ruins daytime productivity and overall quality of life.

Nocturia may be a symptom of a variety of health conditions. It may represent a developing condition like chronic kidney disease. [2] It may also be a symptom of obstructive sleep apnea, overactive bladder, diabetes, or, especially in older men – benign prostate enlargement. [3] Advanced age and inadequate sleep can also cause concerns for proper bladder function.

Several strategies have proven successful in reducing and even eliminating the occurrence of nocturia. These range from drugs, nutritional supplements, surgery, and even simple lifestyle changes.

Desmopressin, a drug used to treat bedwetting for children, has been prescribed more frequently for adults in recent years. However, like many pharmaceuticals, there are several concerns regarding this drug’s side effects. These include potential hyponatremia, as well as headache, nausea, vomiting, loss of consciousness and death. [8] Another drug more frequently used to treat overactive bladder is botox (short for Botulinum toxin). While the effects may last for several months, serious questions remain about its safety. [9]

Surgery should be the last resort, and for some men suffering from BPH (benign prostate hypoplasia) surgery has proven successful. Men who had part or all of their prostate removed have reported improved sleep and quality of life. [10] Despite this, surgery should remain a last resort only after all less invasive methods have been exhausted, especially those that focus on nutrition or lifestyle changes.

In many cases, lifestyle changes have proven as effective as drugs. Studies have found that simple changes such as reducing fluid intake before bed, exercising daily, keeping warm while sleeping and not spending too many hours in bed can reduce the need to get up and empty the bladder. [11] Pelvic floor exercises have also been used to strengthen the muscles around the prostate and bladder, reducing or eliminating the need to empty the bladder during the night. Additionally, for men, protecting prostate health also appears to be a significant factor in avoiding nocturia.

Considering the potential complications that accompany consistent nocturia, following these protocols can go a long way to ensuring quality sleep and maintaining an enjoyable quality of life.