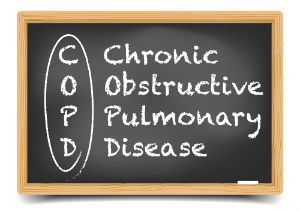 As the third leading cause of death in the United States, chronic obstructive pulmonary disease, or COPD, probably affects – or will affect – someone you know. While COPD may not be highly profiled as heart disease or cancer, it’s still one of the most prevalent and deadly conditions today. In order to fight against the development of COPD and support your lung health, you should educate yourself on its facts, causes, and symptoms.

7 Facts You Should Know About COPD

In order to reduce COPD in our world, along with every other disease known to man, awareness around the issue is crucial. Prevention is the lock, and knowledge is the key.

Two conditions make up what we commonly refer to as COPD: emphysema and chronic bronchitis. Emphysema damages the air sacs in the lungs, causing shortness of breath. Chronic bronchitis is very similar, and also impairs breathing ability. Other conditions grouped under the COPD umbrella include non-reversible asthma and some forms of bronchiectasis, a condition defined by the widening, stretching, and scarring of the airways in the lungs.

2. Who is Affected by COPD?

COPD is estimated to affect 24 million people in the United States, with 3 million new cases every year. It primarily hits adults 40 years and older who have been exposed to lung irritants, like tobacco smoke or heavy air pollution. Many people who suffer from COPD are in the early stages and may not know they have it.

COPD has a number of causes, many of which are avoidable. Here’s a quick rundown on the main contributors. First, smoking cigarettes, cigars, and pipes, as well as exposure to secondhand smoke, is the most common causes of COPD. Inhaling harmful fumes, chemicals, and dust, especially from work environments, are also contributing factors to many people. A genetic condition known as AATD, or Alpha-1 Antitrypsin Deficiency, increases the risk. Individuals with these genes have white blood cells that attack lung tissue and cause the deterioration observed in COPD.

4. The Effects of COPD On Your Body

Persons with COPD suffer from difficulty breathing, a symptom that carries a heavy toll on quality of life. Flare-ups may occur and include frequent coughing, hyperventilation, frequent respiratory infections, wheezing and tightness in the chest. Coughs may produce mucus, or they may be dry and hacking.

6. The Outlook for COPD

The damage caused by COPD cannot be reversed; however, if it’s caught early enough, its progression can be slowed. Patients are more susceptible to diseases that affect the lungs, such as the flu and pneumonia. For this reason, patients have to be carefully monitored by their doctor in order to catch these secondary conditions early.

Although it cannot be cured, there are a few ways to make yourself feel a little better. Vitamin D deficiency is common among COPD patients. Studies have shown increasing vitamin D levels reduces the frequency and occurrence of flare-ups. [1] [2] I recommend supplementing with at least 2000 IUs of vitamin D3 daily; however, specific recommendations can only be determined after getting your vitamin D levels tested. Studies suggest this easy-to-find supplement eases coughing and tightness. [3] The research recommends 1,200 mg taken daily for the best effect. Magnesium improves the ability of muscles to relax, so supplementing with magnesium may help with opening the airways. Take 500mg of magnesium up to twice daily, depending on your needs.

If you’re suffering from COPD or know someone that is, you can support your health by following the above recommendations. As mentioned previously, be sure to use these strategies alongside the advice of your doctor. Don’t replace medications with any supplements; instead, look at supplement regimens as a complementary approach to your medical treatment.