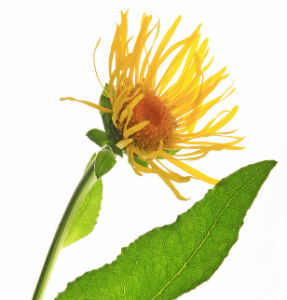 Elecampane, also known as horse heal and marchalan, is a plant common in Great Britain, central and southern Europe, and Asia. Elecampane, has been long valued as an effective respiratory support herb, even being listed in the U.S. Pharmacopeia. Traditional Chinese and Indian Ayurvedic medicine use elecampane for bronchitis and asthma, as did ancient Greeks and Romans. In the 1800’s, lozenges, candy, and cough drops were all produced from elecampane root.

Elecampane has actions, which are expectorant, anti-tussive, sedative, anti-fungal, relaxing, warming, and anti-microbial. Elecampane can soothe bronchial tube linings and act as an expectorant for lung cleansing. For this reason, elecampane may be beneficial in supporting any respiratory condition which produces copious mucus discharge.

Why is Elecampane Beneficial?

Elecampane was used traditionally as a specific remedy for chronic bronchitis and bronchial asthma as the root contains helenalin, helenin, and the most effective ingredient inulin, a phytochemical that coats and soothes bronchial passages and is an expectorant which helps to reduce chronic bronchitis secretions.

Alantolactone, a volatile compound with expectorant, secretolytic and antitussive actions; has also been shown to assist the body in fighting harmful organisms. Alantolactone has exhibited the ability to help the reduce redness and hypotensive properties in animals.

Researchers at Cork Institute of Technology (CIT) in Ireland have shown that herbal extracts are effective at killing harmful organisms.

Elecampane formulas are often used to relieve a cough. In, “Relaxant effects on tracheal and ileal smooth muscles of the guinea pig” by Reiter M. Brandt, it was noted that elecampane root has a relaxing effect on smooth tracheal muscle. The plant’s bitter tonic properties stimulate the appetite and digestion, increasing the flow of bile, and can support a debilitated respiratory condition, particularly helpful following influenza or bronchitis. John Gerard recommended elecampane for "the shortness of breath."

According to Andrew Pacholyk, a graduate of the Master of Science of Traditional Oriental Medicine, elecampane root is used to support good lung health in individuals who are prone to asthma attacks.

Although elecampane is often discussed in conjunction with bronchitis and emphysema, it has traditionally been used to relieve symptoms of pulmonary tuberculosis and, according to recent American research on tuberculosis. Elecampane’s volatile oils stimulate circulation and the bronchi, bronchioles and nose; the saponins quicken expulsion of mucus from the lungs.

NOTE: Elecampane is available in capsules, tinctures, and teas. Individuals suffering from cardiac concerns or hypertension should consume elecampane no more than once a week. If using it in meals, elecampane can be kept in water a half hour prior to reduce the quantity of sodium it contains.