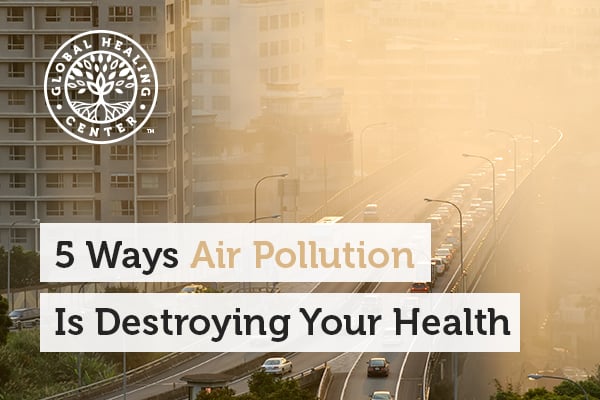 You probably already know about some of the dangers that severe air pollution exposure can cause and how places like stop lights at intersections can increase your exposure to harmful air particles up to 29 times more than the open road. While these facts are startling, you probably don’t know about the almost invisible dangers. [1] Namely the numerous diseases and cognitive issues now being linked to air pollution. Here we'll get into five ways you’re letting air pollution destroy your health.

The Hidden Dangers of Air Pollution

Despite the slow turn to more sustainable forms of agriculture and industry, air pollution is still a big concern. Here are just some of the ways air pollution negatively affects your health.

1. Air Pollution is Linked to Suicide

It may seem crazy to think that air pollution could lead to something as serious as suicide, but studies in Taiwan, South Korea, China, and now Utah suggest a link. Not only is suicide the 10th leading cause of death in the US, it is the number 8th cause of death in Utah. [2] Obviously, there are many factors that must be considered when discussing causes of suicide; however, suicide rates increased in Utah during the spring and fall (a time when certain aspects of air pollution can be worse).

We all know that air pollution can exacerbate symptoms of asthma and other respiratory-related illnesses and diseases, but did you also know that it can affect brain development? Dr. Jordi Sunyer did a study to see just how affected schoolchildren are by air pollution (specifically traffic pollution). The study concluded that children who attended schools in polluted areas showed overall slower cognition in comparison to those who attended schools in areas with less traffic pollution. “The associations between slower cognitive development and higher levels of air pollutants remained after the researchers took factors such as parents’ education, commuting time, smoking in the home and green spaces at school into account.” [3]

Those who fly frequently (especially pilots or other airline staff) could potentially be more at risk for certain issues, dubbed “aerotoxic syndrome.” Most planes have a mechanism that compresses air from the engines and uses that as air in the cabin, but sometimes, these mechanisms malfunction and allow oil particles to taint the cabin air. Many airline employees have mentioned this, but one pilot, Richard Westgate, passed away in 2012 after claiming to be a victim of poisonous and toxic cabin fumes. [4]

4. Cremations Release Mercury Into the Air

With land for burials becoming more scarce (and also more expensive), many people turn to cremation as an alternate form of honoring the body of a loved one who has passed on. The unfortunate side effect of cremation is mercury emissions. [5] Honoring a fallen loved one should not come at the price of endangering yourself and others, but there are alternatives such as alkaline hydrolysis or “liquid cremation” that are far healthier for the environment and for you.

Autism and related disorders have been on the rise for some time and research suggests air pollution may be a contributing factor. Several reports noted a link between exposure to toxic metals and other pollutants in children who were more at risk to develop autism. Other studies focused on pregnant women and how closely they lived to freeways and other sources of heavy pollution. All of the studies found similar exposures to a handful of particular pollutants that seemed to increase the risk of autism in newborns. [6]

It’s difficult to remove all air pollution from your life, unfortunately, but you can monitor and limit your exposure. Keep abreast with local news about your city or even check in on a Breathe Cam. [7] Keep plants inside your home to help remove harmful pollutants. [8] [9] Consider an air purification device, they can be a great active approach for purifying the air in your home.