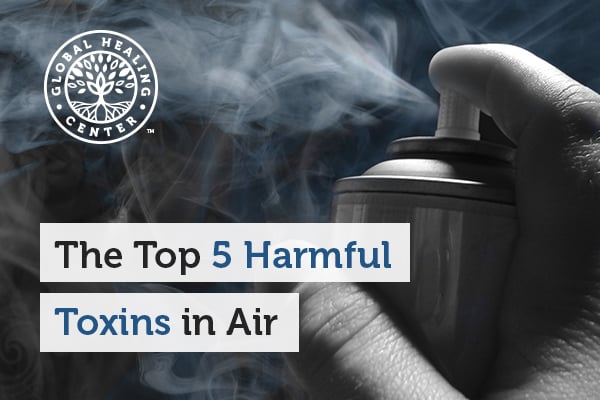 A major part of how healthy we are comes from how clean the air we breathe really is. Fumes and carcinogens from factories and automobile exhaust, and tons of other harmful gases are all around us. These are dangerous molecules to inhale, and they also decrease the actual amount of oxygen in the air. Now, consider this: most of our airborne toxins are inhaled while we're inside because we spend most of our lives indoors whether it's in offices, homes, schools, churches.

And since that's where most of our time is spent - at home, in stores, restaurants and more, it's important to be aware of what's in that air you breathe most often: smoke, pet dander, paint fumes, mold, mildew and possibly billions of microorganisms.

Oxygen is the major component that the body uses to neutralize toxins and remove them from the body. The air we breathe is low in oxygen content when it is polluted with carcinogens; toxic factory and auto exhaust fumes, and many other things. We are suffocating. "Dirty" air presents less than adequate oxygen levels for your body to perform its tasks optimally. That means less oxygen and more toxins to the bloodstream, and the colon, which is responsible for eliminating toxins from your body.

There is very little chance that you or a group of you will make any significant changes in the way that factories burn off waste, or change the way that car manufacturers design their exhaust systems in a significantly short amount of time. Because most of your toxic molecules are inhaled while inside anyway, we are going to focus the top 5 toxins from indoor air.

Almost no one argues against the fact that cigarettes are bad. Not anymore, anyway. And unfortunately for us all, we now know that quitting doesn't save us all. We know that there is danger in smoking. We are now attending to the secondhand smoke dangers as well. Secondhand smoke is a real concern that requires uncomfortable ways of living in order to compensate for it.

For many years smoking has been linked to lung cancer. It's also been linked to colorectal cancer. Polyps become enlarged and irritated with secondhand smoke inhalation. The larger the polyp, the greater is the risk of it metastasizing into cancer. People are paying attention to the dangers of secondhand smoke. This awareness is the reason that you now experience 'SMOKE FREE' restaurants and workplaces and homes. When you inhale cigarette smoke, you are breathing in tar and other additives which are difficult to expel from your body. In the human body they can cause cancer, in children, there is the added danger of causing damage to their still-developing organs.

The dangers of lead and mercury added to paints have been assessed and addressed by eliminating them from paint formulas. Some paints on the market give off fumes called Volatile Organic Compounds which is unsafe for inhaling. Even with a high vapor pressure causing it to dissipate quickly, there are times when it is inhaled. Over time, the buildup of these VOC’s causes toxins to build up in the body which can lead to headaches, loss of coordination, liver damage and other disorders. You should know that there is a danger to breathing in these fumes even outdoors. However, the greater threat is indoors, which is why many paints come with the warning that you should use them only in well ventilated areas.

An even better solution is to buy paints that do not contain these compounds. Know too that the fumes don't come only from some paints. The EPA has a long list of common products that emit these harmful fumes, such as, minerals, varnishes, enamels, lacquers, stains, latex, and water colors. It really would be an impossible task to eliminate the threat from all products that contain these volatile compounds. For that reason you should make the effort to reduce them in your home by using VOC-Free Paints.

According to the EPA, biological contaminants are "living organisms or their derivatives," and they include mold, mildew, bacteria, dust mites, animal dander and viruses. These organisms build up in the body to toxic levels and they can cause respiratory concerns among other things. Children, elderly and people with weakened immune systems are especially susceptible to airborne biological contaminants.

Pet dander is dead animal skin cells, reminiscent of human dandruff, which sloughs off naturally as the animal's skin becomes dry. These skin cells are found in concentrated amounts around the animal's sleeping area. Once airborne these particles can be inhaled or swallowed. It's estimated that 30% of allergy sufferers are pet owners. So they definitely need to reduce the airborne particles from their pets.

Mold is naturally occurring outdoors. It's only natural that some of the spores will get into your home just as a matter of moving in and out. When they enter and begin to multiply then there is the danger of inhaling dangerous quantities. The threats from the spores of mold and mildew can include: respiratory ailments, headaches, nausea and diarrhea. Mold found in damp areas like bathrooms are generally referred to as mildew. These spores are unclean and unsightly. When you go in and scrub them away, you are actually making them airborne and that's when there's a chance that you will inhale them.

I highly recommend cleansing the air in your home with the REME+ advanced air purification unit. I also suggest regular lung cleansing with a product such as Allertrex®.