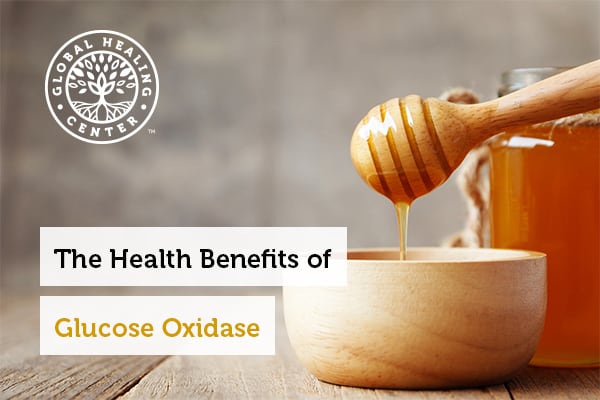 Glucose oxidase, also called notatin, is one of the many useful enzymes that nature has given us, and is produced by fungi, bacteria, and insects. Commonly found in bee pollen and honey, glucose oxidase plays a key role in digestive processes, overall human health, physical rejuvenation, and anti-aging.

What Does Glucose Oxidase Do?

Glucose oxidase catalyzes a reaction in which glucose sugar is broken down into hydrogen peroxide and gluconolactone. This reaction simultaneously consumes the glucose and exhibits significant activity against harmful organisms due to the production of hydrogen peroxide.

The Health Benefits of Glucose Oxidase

In a study published in the Journal of Dairy Science, it was shown that, due to its oxidation properties, glucose oxidase offers an alternative to chemical additives to increase survival of probiotic flora in yogurt.[1]

2. Acts as a Biosensor for Diabetics

This once obscure enzyme is now being used in blood glucose monitoring devices used at home for diabetes management. This enzyme can help the device keep track of blood sugar levels via bio-sensor technology.[2]

The hydrogen peroxide formed when the enzyme hydrolyzes glucose sugar deters many organisms. Notatin resists bacteria in the presence of glucose and oxygen.[3] Other studies have found that glucose oxidase repels fungi, such as Candida.[4] These properties contribute to the use of glucose oxidase in food preservation, as it fights harmful organism infestations and spoilage due to oxidation.

Raw honey has been used for centuries as a remedy for many health conditions. Enzymes found in honey, such as glucose oxidase are shown to help promote seasonal wellness, especially for the respiratory system. Honey’s activity worked even better when mixed with lemon, and it was more effective at fighting harmful organisms than the antibiotics amoxicillin and azithromycin.[5]

How to Read the Units of Measurement for Glucose Oxidase

Glucose oxidase is measured in GO (glucose oxidase units), whereby one glucose oxidase unit is the amount of enzyme that will oxidize 1 µmol of glucose per minute under the assay conditions. The higher the number, the more active the enzyme. The FCC notation stands for Foods Chemical Codex and is a division of USP (United States Pharmacopeia). It sets standards for ingredients.

Where Can I Find the Best Source of Glucose Oxidase?

VeganZyme® contains a 100% vegan form of glucose oxidase produced by the natural fermentation process of Aspergillus niger. It comes from all vegetarian, non-GMO sources, it's kosher certified, gluten-free, contains no animal products, and completely suitable for vegetarians and vegans.

VeganZyme is the most advanced full-spectrum systemic and digestive enzyme formula in the world and is free from fillers and toxic compounds. This formula contains digestive enzymes which help digest fats (lipids), sugars, proteins, carbohydrates, and other food sources.

VeganZyme may also be used as a systemic enzyme blend to break down excess mucus, fibrin, various toxins, allergens, as well as excess clotting factors throughout your body.