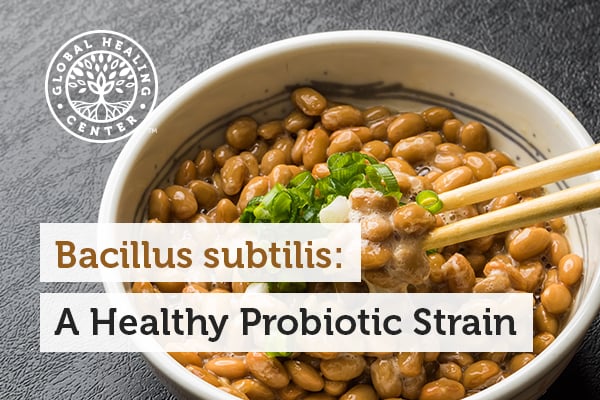 Bacillus subtilis is a rod-shaped, Gram-positive bacteria that is found in soil and the gut of humans and some types of animals. Bacillus subtilis is commonly included in probiotic supplement formulations. It's a useful and beneficial probiotic that supports digestion, enzyme production, immune and digestive system health. Below are the main health benefits of this specific probiotic strain.

The main health benefit of Bacillus subtilis is its ability to help balance the gut, a trait it shares with other probiotics. Bacillus subtilis is a robust strain that not only can withstand the gastrointestinal tract but also can positively affect the composition of the microbiota. It does this by forming endospores — durable protein envelopes that protect it from heat, light, and other stressors.[1]

Studies have shown that this probiotic produces compounds that are naturally disruptive to harmful organisms. In essence, Bacillus subtilis helps displace unfriendly organisms in the body by affecting their ability to colonize.[4]

Several lab studies found that probiotic strains, including Bacillus subtilis, can bind mycotoxins – toxic compounds produced by fungi, especially mold, that often contaminate corn, nuts, and other foods.[5, 6] Not only did probiotic bacteria bind and break down these toxins, some strains were even able to fix cell damage caused by aflatoxins and mycotoxins.[5, 7]

Enzymes and probiotics have a symbiotic relationship. Both are critical for digestive and gastrointestinal health. Individually, not only do enzymes promote intestinal integrity, they help create an environment that's favorable to probiotic bacteria.[8]

In turn, Bacillus subtilis supports the production of beneficial enzymes in the gut,[5] including amylase, protease, pullulanase, chitinase, xylanase, and lipase.

Bacillus subtilis offers other incredible health benefits. It may support a healthy immune system, especially in older adults.[9] It also protects the integrity of its DNA – a trait that makes it resistant to mutation.[10] And, perhaps best of all, Bacillus subtilis contributes to a healthy digestive system.[11]

Originally called Vibrio subtilis by Christian Gottfried Ehrenberg, a prolific German scientist, Bacillus subtilis was given its current name in 1872 by Ferdinand Cohn, a botanist and one of the founders of bacteriology. In the early 20th century, the strain was popular as a natural means for supporting gastrointestinal health. Since then, it has been used in animal feed, probiotic supplements, and food production. Bacillus subtilis is used in Japan and Korea to produce fermented soybean dishes.[12] This bacteria is considered safe and beneficial for human consumption by both the U.S. Food and Drug Administration (FDA) and the European Food Safety Authority (EFSA).

Bacillus subtilis is readily found in soil, a testament to its ability to withstand environmental stressors. But, that doesn't mean you need to eat a plate of dirt to introduce Bacillus subtilis to your gut. Some fermented foods, such as natto — a fermented soybean dish that's popular in Japan — are a source of Bacillus subtilis and other probiotics. Many people find that the easiest and most consistent way to reliably strengthen their gut with Bacillus subtilis is with the help of a trusted, high-quality probiotic supplement.

Global Healing has created Global Healing's Ultimate Probiotic, a one-of-a-kind probiotic formula that features Bacillus subtilis along with more than twenty other highly beneficial probiotic strains. It's the ultimate product for supporting normal digestion, metabolism, and gut health. Global Healing's Ultimate Probiotic is formulated with prebiotics to help the probiotics flourish, and it’s available in 75 billion CFUs. CFUs, or colony-forming units, refer to individual colonies of bacteria. The more CFUs, the better the strain's potential for success.