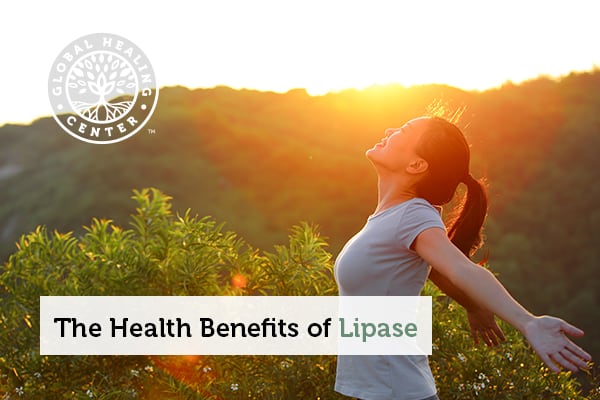 Lipase is an enzyme that’s produced by the pancreas. It helps digest fats to unlock the fat-soluble nutrients, like vitamins A, D, E, and K, that they contain. Since many people consume less-than-optimal amounts of fat-soluble nutrients, it is essential to digest and absorb the ones we do consume as efficiently as possible. In addition, the common effects of indigestion, which include bloating, abdominal discomfort and gas, can result from inefficiently digesting fat as a result of inadequate amounts of lipase in the body. Here we’ll describe those and other contributions made by this essential enzyme.

Research from France shows that our bodies produce lower amounts of digestive enzymes like lipase as we age.[1] These studies found that the enzymes lipase, phospholipase, and chymotrypsin decrease in concentration and output with age. This provides in favor of lipase supplementation, particularly in older adults.

2. May Help With Symptoms of Gluten Sensitivity

Celiac disease is a digestive condition in which an affected person cannot digest gluten, a protein found in wheat and other grains. Approximately 1% of the U.S. population has Celiac disease, although more have gluten intolerance.[2] Pancreatic enzymes such as lipase have been studied as a potential aid. One study done on children with celiac disease found that supplemental lipase helped them better gain weight and keep nutrients in the body in the first 30 days after diagnosis.[3]

According to several studies, supplementing with lipase along with other enzymes reduces the symptoms of indigestion including the sensation of being overly full, flatulence and bloating following a meal of high-fat food.[4, 5] As these are the symptoms typically connected to irritable bowel syndrome (IBS), scientists believe that the lipase enzyme may also help this condition.

Cystic fibrosis causes the digestive system to produce excess mucus, and this prevents pancreatic enzymes from reaching the intestines, causing nutritional deficiencies. Many doctors report that supplementing with lipase can help reduce symptoms, and most importantly, help people absorb nutrients from the food they are eating. Enzyme therapy has been called a “backbone” of the nutritional treatment of this condition.[6]

Research shows that the lipase enzyme can help patients with pancreatic insufficiency avoid something known as excessive fecal fat loss (steatorrhea).[7] Pancreatic insufficiency impairs nutrient absorption from fats, this produces fat cravings and may eventually actually lead to weight gain. With adequate levels of this enzyme in the body, essential fatty acids and fat-soluble nutrients can be digested and used in the body. Similarly, lipase helps us utilize vitamins A, D, E and K. For example, vitamin A requires both bile and lipase to be released from food.[8]

Animal and human studies have shown that the lipase produced by the body plays a role in immune function.[9] By increasing enzyme secretions or supplementing, we may experience an overall boost to our immune function.

Studies confirm that the lipase enzyme is critically important for our ability to digest fat. One study compared fungal-derived lipase with animal-derived lipase in people with pancreatic disease, some who had recently recovered from surgery and some who had not.[10] The study not only found that large servings of lipase helped stabilize fat digestion but also found that lower doses of fungal-derived lipase were needed compared with animal-derived lipase. An animal study found the enzyme also helped reverse some forms of pancreatic disease in dogs.[11] A recent review of lipase therapy showed that supplementation could help reduce lipid malabsorption and return fat digestion to optimal levels.[12]

How to Read the Units of Measurement for Lipase

Lipase (FCC LU/g) measures the hydrolysis of lipids into glycerol and fatty acids. The FCC LU (Lipase Units) assay is based on the potentiometric measurement of the rate at which the preparations will catalyze the hydrolysis of tributyrin. The FCC notation stands for Foods Chemical Codex and is a division of USP (United States Pharmacopeia). It sets standards for ingredients. In the case of enzymes, FCC is a standard test used to accurately determine enzyme activity level. The higher the LU number, the more active it is.

Where Can I Find the Best Source of Lipase?

VeganZyme® contains a 100% vegan form of lipase extracted from the fermentation of the fungus Aspergillus niger. It comes from all non-GMO sources, it's kosher certified, gluten-free, and suitable for vegetarians and vegans.

VeganZyme is the most advanced full-spectrum systemic and digestive enzyme formula in the world and is free from fillers and toxic compounds. This formula contains digestive enzymes, which help digest fat, sugar, protein, carbohydrates, gluten, fruits and vegetables, cereals, legumes, bran, nuts and seeds, soy, dairy, and all other food sources.