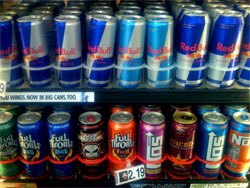 Often promising a quick boost, an "energy drink" is generally defined as a drink which contains ingredients claimed to enhance mental and physical performance- in some way or another. Energy drinks have soared in popularity since the 1990’s and there are many, many readily available brands.

Energy drinks are usually packaged like soda, and have a soda-like taste, but their distinction from soda lies in the extra ingredients, or at least the extra hype surrounding the ingredients. The often-promised “heightened mental awareness” from energy drinks is largely due to caffeine content, which can vary tremendously. According to the Department of Psychiatry and Behavioral Sciences at The Johns Hopkins University School of Medicine, energy drink caffeine content generally ranges from 50 mg to a mind-blowing, perhaps literally, 505 mg per can or bottle. [1]

Caffeine is natural and the mostly widely consumed stimulant in the world, many consumers believe it’s a worry-free source of immediate energy with absolutely no side effects. This couldn’t be further from the truth.

In addition to caffeine, most energy drinks advertise a special blend of other herbs and ingredients. Sugar free varieties exist, but most energy drinks also contain large amounts of sugar. The “energy providing” elixirs are usually combinations of guarana, taurine, ginseng, and B vitamins. I would challenge anyone to find an energy drink whose marketing messages are in line with the abilities of what’s in the can. Wings? I doubt it. Michigan State University's Kalamazoo Center for Medical Studies reports that the ginseng content of most energy drinks falls well below most dietary supplement guidelines. [4]

A concern with the use of the herbs in these drinks is their source. The manufacturers of energy drinks are not required to list whether or not the herbs they use have been sprayed with toxic pesticides, irradiated or watered with contaminated water supplies. There is no way of knowing what other toxins are contained in these drinks and whether or not these herbs will have a negative effect.

How Popular are Energy Drinks?

Based on the 2010 National Health Interview Survey data, the CDC reported that one in three adults consumed an energy drink within the past week, 21% had one more than once in the last week, and 11% consumed more than three energy drinks per week. [5] It raises the question, what’s going on in our lives and personal health for us to be so reliant on a constant stream of turbo juice?

Consumption of energy drinks by both recreational and competitive athletes has increased dramatically in recent years.

The Department of Exercise Science at Creighton University conducted a randomized, double-blind, crossover study to examine the effect of sugar-free Red Bull on one repetition bench press. Seventeen college-age, resistance-trained men participated and results suggested that the sugar-free Red Bull offered no improvement or enhancement of one repetition bench press performance.[7]

A separate double-blind, randomized crossover study was conducted by Utah State University and determined that a low-calorie caffeine-taurine energy drink did NOT enhance the sprint performance and anaerobic power of the 20 NCAA Division I football players who participated in the research. [8]

Do Energy Drinks Belong in the Workplace?

The University of Louisiana at Lafayette warns that the mental and physical effects of energy drinks (altered sleep patterns, arrhythmias) may be detrimental to workplace safety, especially in the healthcare field. [9] Would you feel comfortable if your surgeon stepped out to down an energy drink before your surgery?

Energy Drinks in the Military

When Walter Reed Army Institute of Research conducted research to analyze the connection between energy drink use and combat-operation sleep concerns that occur among service members, the conclusions were not positive.

Data from Operation Enduring Freedom in Afghanistan showed that over 44% of deployed service members consumed at least one energy drink daily and nearly 14% consumed more than three per day. As can be expected, the service members who consumed three or more energy drinks per day were far more likely to sleep less than 4 hours a night, they were also more likely to experience ongoing stress and fatigue. [10]

Do You Really Need Energy Drinks?

There are heavy, heavy marketing dollars at work to ensure your opinion of energy drinks is that they are so potent and effective they're one step away from being a pharmaceutical product. This is nothing more than hype. Based on the sugar and chemical content alone of most energy drinks (just check the ingredients label), I recommend avoiding them entirely. They’re bad for your teeth and only add more toxins to your body. Their dehydrating action decrease your body's internal water supply and natural detoxification processes. Where's the benefit?

If you’re so constantly run down you need energy drinks to get you through the day, I recommend taking an inventory of your life to determine the root causes of your exhaustion. Are you getting enough sleep? Are you nutritionally deprived? What are you eating? Are you drinking enough water? Are you getting regular exercise? Fatigue will stem from being deficient with any one of those habits. Getting them in check can completely eliminate your desire for the “enhanced” and over-hyped soda pop that is the average energy drink. Get your nutrition in check, get your exercise routine in check, get your sleep in check, and if you're concerned about the effects of built up toxins, you can also cleanse your body.