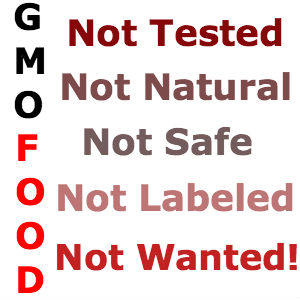 Glyphosate, the ingredient in Monsanto’s Roundup, is the most heavily used herbicide on GMO crops. In 2007 (the most recent year for which data is available), U.S. farmers used 88,000 tons of glyphosate. Not accounting for increased use, that adds up to 580,000 tons of glyphosate dumped onto our food and into our soil and water in the past six years alone.

That is completely unacceptable.

Glyphosate is Toxic Poison and It's on Your Food

The safety of GMO foods is highly suspect and adding toxic poison like glyphosate only compounds the concern. Research shows that glyphosate is causing chronic, long-term health concerns for all of us, especially our kids. In the words of one scientist, the negative impact of glyphosate residues found in the Western diet “ . . . is insidious and manifests slowly over time, as swelling and redness damages cellular systems throughout the body.”

The concern is getting worse.

Currently, GMO foods do not need to be labeled. This makes it very difficult for consumers to avoid them. When laws mandate that this trash be labeled as such, consumers will be empowered to make better, more informed choices. Monsanto and the agri-chemical industry do not want you to be empowered, they want you to be a mindless drone that gives them your money while quietly consuming their toxic poison.

It's time for a change and the Organic Consumer's Association is leading the charge. Currently, Washington State is the battle ground in the fight against Monsanto. There is an initiative, I-522, to mandate GMO labeling of food in Washington State.

The time to donate is nearing its end but the Organic Consumer's Association is about $20k short of their goal – and the goal is not arbitrary, if they raise $150,000 by July 27, Dr. Joseph Mercola will make a matching donation of $150,000!

When consumers stop buying foods containing genetically modified ingredients, food manufacturers will stop putting GMOs in their products. We can only stop Monsanto if we continue the fight and don't give up. Global Healing has donated, join us in the cause and donate right now!