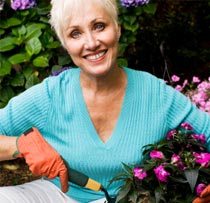 It's common knowledge that calcium plays an important role in maintaining strong, healthy bones later in life. For women who have passed their reproductive years, this fact is especially true. But according to new research from Italy [1], there may be another important reason for postmenopausal women to keep an eye on their calcium levels.

Italian researchers at the Gaetano Pini Institute Department of Rheumatology in Milan followed 825 postmenopausal women already diagnosed with hypertension. They found that just over 35 percent of the women sampled who consumed low amounts of calcium from dairy sources also exhibited signs of osteoporosis. Women in the same sample group who consumed higher levels of calcium showed significantly lower levels of the condition – roughly 20 percent in all.

Upon further investigation, they found that lower calcium levels was also statistically tied to an increased risk of developing both hypertension and osteoporosis when compared to postmenopausal control populations.

The researchers conclude that these findings support the theory that there may in fact be a strong connection between hypertension and decreased bone mass, which further implies that low calcium intake in postmenopausal women puts them not only at increased risk for osteoporosis but hypertension as well. In an ideal world, women of all ages should be getting sufficient amounts of calcium from a healthy, well-balanced diet that includes foods rich in calcium. The sad reality, however, is that many people fail to consume their daily requirement of calcium.

Vitamin fortified cereal grains and fruit juices are often rich in both calcium and vitamin D. Certain beans and leafy green vegetables such as kale and spinach can also be excellent sources.

A handful of raw seeds, including flax, sesame or chia, will also provide you with plenty of calcium, among plenty of other nutrients. Broccoli and oranges are also very high in calcium, as well as vitamin C and vitamin A. Find out how much calcium is in your favorite foods, and then eat those on a daily basis.

Is There an Easier Way to Get More Calcium?

While giving your body all the calcium it needs from diet alone is ideal, doing so becomes increasingly difficult with age. Women of all ages can benefit tremendously from taking a high-quality calcium dietary supplement to meet their body's needs.

The concern is only a small percentage of the calcium in most dietary supplements actually makes its way into the cells that make up the human body. In fact, over 90% of it usually goes to waste.

I recommend IntraCal™, which is a scientifically designed form of calcium orotate, combined with magnesium orotate salts, which efficiently ferries mineral atoms across cell membranes so they can be better absorbed and utilized. And because IntraCal is completely free of lactose and other animal byproducts, it's an especially great way for vegetarians who avoid fish and dairy, to work an adequate amount of calcium into their diet.