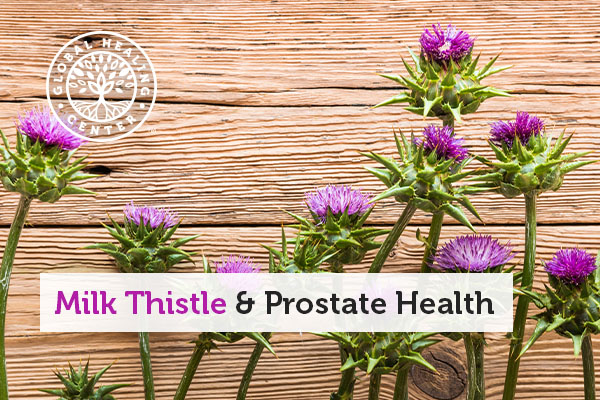 Many older guys think that prostate issues just come with the territory as they age. It's looked at one of those things that "just happens" and as common as prostate concerns among aging men are, it's no wonder many have just accepted it as their fate. This doesn't necessarily have to be the case. There are a few herbs, including saw palmetto and stinging nettle, that are known to support prostate health. Additionally, research has shown that milk thistle possesses potent flavonoids that promote prostate health and hormone balance in men. Even better, recent research has found milk thistle’s effect goes beyond prostate support and it also can be beneficial to liver and gall bladder function, especially for men.

What are the active compounds in milk thistle? It's flavonoids. The flavonoids in milk thistle are generally referred to as silymarin. In fact ‘silymarin’ and ‘milk thistle’ are often used interchangeably. The primary compound in silymarin which has attracted much attention recently is known as silibinin and the studies conducted on isolated silibinin have found it provides protective effects for the prostate. [1]

Research has indicated silibinin controls protein development to ensure prostate cells function properly as a man ages. [2] Additional compounds, known as flavolignons, have also been identified as a powerful protective agent for the prostate. [3] These flavolignons combined with the potency of silibinin have prompted researchers to take note of the potent one-two punch of milk thistle and its effect on prostate health.

Research into the effectiveness of milk thistle in protecting prostate health has yielded additional application for men’s health and researchers have also observed rejuvenated sexual hormone levels, including testosterone. [4] While further research is needed to determine with certainty the specific impact of milk thistle on a man’s hormone levels, the research currently indicates the active compounds in milk thistle may directly impact male sexual hormone levels. This is fantastic news for men who are currently experiencing the symptoms of andropause.

Proper liver function is integral to good health. In my estimation, the liver ranks near the top of the list of the most important organs in your body... and milk thistle has been observed as an effective liver protecting agent. It does this by promoting constant regeneration of liver cells. This deters a build-up of toxins by facilitating a constant stream of toxin removal. [5]

The human body produces a powerful antioxidant known as glutathione; some consider it the super-antioxidant and one of its main responsibilities is toxin removal. No surprise, the majority of glutathione is produced in the liver. When the liver produces glutathione normally, good health and longevity are supported. Without glutathione production, however, a man may age faster or be much more likely to suffer from age-related health challenges and degenerative illnesses. [6]

As supportive as milk thistle is for liver function and prostate health, it has another added bonus – no side effects. This makes it a practical and necessary supplement, especially in today’s highly polluted and toxic environment. The benefits milk thistle offers make it a good daily supplement for men.