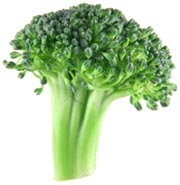 We all know that it's important to eat our vegetables. At least, that's what most of us have heard since we were kids. What our mother's told us as when we were young, our doctors tell us as we get older. Sometimes though, it helps to have a more specific reason than high cholesterol, or even a motherly "because I said so." Especially for people who aren't big fans of eating organic greens.

According to a new study conducted at Oregon State University's Linus Pauling Micronutrient Research Institute confirms that sulforaphane, a phytochemical found in broccoli and related cruciferous vegetables, such as cauliflower and cabbage, have a natural ability to target and attack prostate cancer cells without harming neighboring cells [1]. Unconnected studies suggest it may have similar promise for breast cancer.

The active chemicals found in everyday foods – such as broccoli – are often much more potent than people would imagine. In fact, determining how to safely adapt these chemical ingredients for medical use is one of the biggest hurdles researchers face. Even edible plants that are considered "rich" in a given nutritional substance, contain relatively low amounts of it by volume. The vast majority of these compounds may also become toxic to humans if taken in large enough concentrations.

While a number of previous investigations have proven that sulforaphane is able to attack both benign and malignant cancer cells, the Oregon State study is one of the first to prove that it is effective without disrupting otherwise healthy tissue. This gives researchers a tremendous tool for developing new, low-risk treatment options, and is likely to encourage additional research into the healing potential of other seemingly mundane edible plants.

Realistically, it could be some time before these findings are applied to any sort of drug development or cancer treatment in a traditional hospital setting. Meanwhile though, the researchers behind the study recommend that we all eat more organic cruciferous vegetables.

Besides broccoli, a number of readily available cruciferous vegetables contain naturally large amounts of sulforaphane. Some good examples of foods high in this important phytochemical include mild and spicy radishes, turnips, watercress, cabbage, arugula, kale, chard, and most other leafy greens.

Unrelated studies also suggest a variety of other cancer-fighting compounds may be present in other herbs and garden vegetables. Celery and parsley, for instance, are especially rich in apigenin - a substance that has shown remarkable promise for fighting breast cancer. Trace amounts of apigenin are also found in oranges, apples, and some tree nuts. The concern is, it's very difficult for the body to effectively extract it from any of these foods on its own.