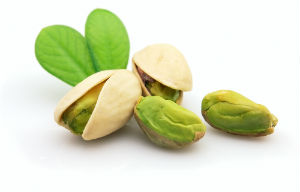 Medical experts have long known that dietary vitamin E, or more specifically a type of vitamin E chemically referred to as gamma-tocopherol, offers a certain amount of protection from some forms of lung cancer. Pistachio nuts are easily accessed, and contain relatively large amounts of gamma-tocopherol vitamin E by total volume. They are also known to be a good source of antioxidants, and have been shown to lower cholesterol levels.

According to Ladia Hernandez, senior research dietitian at the University of Texas M.D. Anderson Cancer Center’s Department of Epidemiology in Houston, this logically suggests that eating foods, such as pistachios, that are naturally rich in gamma-tocopherol, could be a valid means of decreasing lung cancer risk.

In a study carried out at Texas Woman’s University — Houston Center campus, 36 generally healthy participants were randomly divided into control and experimental test groups.[2] Members assigned to the study’s experimental test group were instructed to consume about 2 ounces of pistachio nuts per day. Members of the study’s comparison control group were instructed to continue with their normal preexisting diets, as usual.

Following an initial two-week baseline assessment period, during which individual normal blood serum levels were established, each of the participants underwent weekly blood tests for an additional four-week period to determine what changes, if any, had occurred.

According Hernandez and her colleagues, participants in the experimental pistachio group showed significantly higher gamma-tocopherol blood serum levels than their control group counterparts. Furthermore, thanks to pistachios natural ability to help lower cholesterol, individual body mass index remained relatively consistent among members of the study’s experimental group. This not only demonstrates that regular consumption of pistachio nuts may help to reduce the risk of lung cancer, but that they do so without unwanted side effects, like weight gain, that could potentially undermine their other health promoting benefits.

Add Pistachios to Your Diet

While pistachio nuts have shown to be a great source of natural cancer and cholesterol fighting chemical compounds, they aren’t the only one. A variety of different tree and ground nuts, as well as their byproducts, have also been proven to contain similarly large quantities of gamma-tocopherol. Pecans and walnuts are also considered to be good and readily available sources.