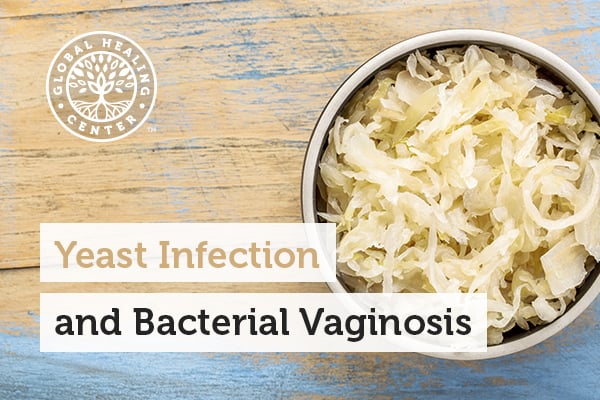 Bacterial vaginosis (BV) is the most common type of vaginal infection, followed by yeast infections. The primary causes of infections are bacterial imbalance - namely an excess of harmful bacteria - or Candida. Both conditions can lead to an unpleasant set of symptoms, including an unusual discharge, a strong, fish-like odor (especially after sex), burning during urination, itching around the outside of the vagina, and vaginal irritation. Some of the more prevalent symptoms of yeast infections are burning, redness, and swelling of the vagina and/or vulva, pain during urination, pain during sex, soreness, and a thick white discharge. [1] [2]

How Do Antibiotics Affect the Vaginal Flora?

Antibiotics and anti-fungal medications are some of the most common treatments for BV and yeast infections. While these might treat the infection itself, they may cause some harm, too. These antibiotics and medicines actually kill off both the good and bad bacteria in the vagina. And not only that, they also kill off many favorable bacteria in the gut as well. When antibiotics disrupt intestinal flora like this, it can lead to a weakened immune system, poor digestion, and even instigate severe digestive disorders. As for the vagina itself, the lack in good bacteria can contribute to an increased likelihood of urinary tract infections and even vaginal candidiasis occurring as a result of the regrowth of harmful bacteria and fungi. [3]

Since bacterial vaginosis and yeast infections are both so often caused by an excess of harmful bacteria in the vagina, it’s important to find ways to support vaginal flora (good bacteria). Studies have shown that taking probiotics along with antibiotics is an effective approach with the best long-term results. [4] Probiotic supplements containing the Lactobacillus bacteria (a good bacteria) have been shown to be especially helpful for encouraging a balanced vaginal environment. [5] Of course, that’s not everything probiotics can do for a woman’s body.

The Role of Beneficial Bacteria in Women’s Health

The importance of probiotics in women’s health is becoming better understood. In addition to supporting a healthier vagina and urinary tract, probiotics also support digestion. [6] As an example, irritable bowel syndrome is more common in women than men, [7] but probiotics have been shown to help ease discomfort in women dealing with this condition. [8]

Probiotics also keep the vaginal environment more acidic which helps promote favorable balance. [9] Women who consume probiotics regularly (whether through diet or supplementation) and eat alkaline foods significantly increase their chances of normal, vaginal balance.[10] If you’re looking to add probiotics to your diet, a few of the best options include: