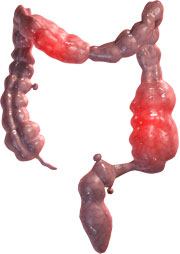 Research published in the Journal of Medical Microbiology shows that certain strains of probiotic bacteria may be the most effective way to alleviate the symptoms of Inflammatory Bowel Disease (IBD) [1]. These findings leaves experts optimistic that safe, effective treatment options for IBD are soon to follow.

What Is IBD and Why Is It Difficult to Treat?

Inflammatory Bowel Disease is a serious medical condition, and should not be confused with Irritable Bowel Syndrome (IBS). While both are generalized terms, which relate to abnormal bowel conditions, one is significantly more serious than the other. While the symptoms of IBS are unpleasant, and can often lead to a dramatic decrease in quality of life, they are not usually fatal.

IBD is usually associated with digestive conditions like Crohn's disease and ulcerative colitis. It usually includes symptoms such as frequent bloody diarrhea, which can become life-threatening if left untreated.

Roughly 10 out of every 50,000 individuals in North America and Europe are affected by Inflammatory Bowel Disease. The exact causes of IBS and IBD remains uncertain; however, research points toward an overactive response by the body's immune system to specific strains of bacteria naturally found in the human digestive tract. In many cases, these are "beneficial" bacteria as they assist the body's natural digestive processes.

These bacteria are normally ignored by the immune system. Unfortunately, for people with IBS or IBD, this is not the case. Their bodies treat this bacteria with hostility and destroy the sensitive digestive tissue they are attached to in effort to expel them.

Despite the connection between intestinal bacteria and IBD, scientists have had difficulty isolating the particular strains of microorganisms which trigger the extreme response. As a result, generalized probiotic treatments have been used for years to alleviate the symptoms of IBD in many patients with only limited success.

Strains of probiotic bacteria such as Faecalibacterium prausnitzii and Butyricicoccus pullicaecorum naturally produce butyric acid and may hold the key to improved treatment options. Researchers speculate that these strains may also produce additional anti-inflammatory compounds that may help with IBD. Focused efforts on treating IBD patients with these probiotic strains have shown significant improvement over more commonly used probiotic bacterium.

Preparing Your Body For Probiotics

Gently cleansing the digestive tract with a safe, all-natural supplement prior to beginning a probiotic regimen is a great way to ensure you get the most from your treatment plan. This helps to create an environment in which probiotic bacteria are able to thrive and helps rid the body of harmful bacteria which may compete with the newly introduced probiotics.

Regular colon cleansing is a great way to help maintain your digestive health but be aware that not all cleansing techniques are created equal. Some can do more harm than good. Do the proper research and know what exactly is in each colon cleansing product.