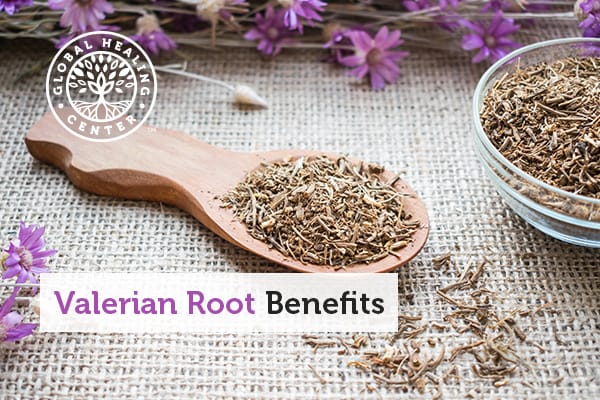 When Hippocrates had a headache, it's possible he enjoyed a nice steaming cup of valerian root tea. The ancient Greek physician was one of the first to describe the therapeutic benefits of valerian root.

Since the early days in Greece and Rome, people sought the benefits of valerian for everything from head discomfort to heart health, nervousness, feminine issues, and the blues. Valerian brings some unique mythological history as well. People once used it to keep away troublesome elves — stay away Dobby! — and folklore experts believe it helped the Pied Piper lure rats away from town.

Garden valerian (Valeriana officinalis) is also known as garden heliotrope, Tagar (in Ayurvedic medicine), cut-finger, and all-heal — funny names for a potent plant! The species originally grew in Asia and Europe, but it now grows throughout North America, as well. Its scientific name derives from the Latin "valere," which means to be strong or healthy.

Fair warning! Valerian is a powerful herb but also has a pungent odor.

People use the root and rhizomes of the long-stalked flowering plant for various ailments, but especially for anxiety and insomnia.

While valerian's small pinkish-white flowers have a sweet smell, valerian oil has a pungent scent, described humorously by some as "dirty feet." Despite any scent, people love it — valerian is the most commonly sold herbal remedy for sleep in both Europe and the United States.[1]

The Top 10 Active Compounds in Valerian

The active components and compounds of this healing herb haven't all been identified — and those that have been isolated and tested don't seem to be solely responsible for the herb's benefits. It's likely the plant's various phytochemicals work together as a team.[2]

Here is a list of some of the beneficial compounds that valerian root contains.[3]

Since valerian root has been used for centuries, you may have heard of some of its more traditional uses. However, valerian has a variety of other unique benefits, from keeping skin healthy to boosting brain sharpness. Read on to learn more.

The most commonly touted benefit of valerian is that it works as a sleep aid, kicking insomnia and restlessness to the side and helping us get some much-needed rest at bedtime. Although clinical evidence is limited, we've seen some promising studies.

Did you know valerian supplements may promote a normal sleep schedule?

When postmenopausal women took valerian supplements twice a day for four weeks, it helped a third of the women experience a better quality of sleep.[4]

Valerian appears to affect sleep by increasing levels of serotonin and noradrenaline.[6]

At best, anxiety is annoying, slowing you down and making you feel nervous about, well, pretty much anything. At worst, it's completely crippling. For centuries, traditional healers have used valerian to ease daily worry and anxiety.

Wow! Valerian root may be your go-to natural remedy for daily anxiety!

If you want a healthy heart long into your golden years, you may find some benefit in taking a valerian supplement (though, of course, it's no substitute for actual medical care).

Valerian essential oil appear to promote normal blood pressure, heart rate, and blood lipid levels — which is how much fat circulates in your bloodstream.[3] Related valerian species (but not V. officinalis) can relax blood vessels, and it's likely that this may also apply to the more commonly used species.[3]

4. Helps During Your Menstrual Cycle

Women with PMS, it's time to relax! Valerian is here to help.

Taking valerian twice a day during the last seven days of a menstrual cycle may not only help physical symptoms but may also ease mood swings and balance emotions associated with premenstrual syndrome (PMS).[9] For more ideas, check out the top natural remedies for PMS symptoms.

Younger schoolchildren are naturally energetic and have trouble focusing, but when it begins to affect their daily lives more than normal, it can become a concern. In children under the age of 12, a combination of valerian root and lemon balm may promote their ability to focus.

Not only that, but valerian with lemon balm can also calm children down and reduce impulsiveness.[10] Not surprisingly given valerian's history of helping with sleep, parents also noticed a difference in the children's sleep and social behavior.[10] The jury is out whether valerian root has similar effects in adults.

6. May Help With Stress

Let's face it. We're all stressed. Between work, family, obligations, and finances, our lives are sometimes just a big ball of stressors. Everyone could use a break. Don't fear: valerian root is here to help.

Learning how to ease the stress in your life is crucial for your health; valerian may help.

Fifty-four volunteers signed up to deliberately stress themselves out with a mental experiment (Who does that right? All in the name of research!). Some took kava kava supplements, some took valerian, and some took a placebo.[11]

The results were encouraging. Those taking the kava and valerian not only had lower blood pressure during the stressful task, but they also reported feeling less stress subjectively. With the valerian group, even their heart rate normalized.[11]

For more ideas on reducing your stress, check out our stress management article.

Once women hit menopause, and even perimenopause, the years leading up to the cessation of menses, women experience many new and often uncomfortable symptoms: hot flashes, mood swings, cramps, plus heightened emotions.

Women took valerian two or three times a day for eight weeks and not only did valerian make hot flashes less intense, it also helped reduce their frequency.[12, 13] It appears that valerian is beneficial, and may be an option for women who do not want to take hormone replacement therapy (HRT) after menopause.

Scientists have researched valerian and its connection to brain health and cognitive activity — like the ability to solve tasks and puzzles, think on your toes, and remember details — and reported encouraging findings.

Valerian root extract may help you accomplish tasks.[14] Valerian may also increase your tendency to explore and try new things. What's more, valerian may help promote normal levels of stress-causing hormones in the hippocampus region of the brain.[14]

Valerian comes in many forms, ranging from teas to capsules or tablets, and from liquid extracts and tinctures to essential oils.

You can take it as you would melatonin, a hormone made in the pineal gland that's commonly sold as a sleep aid. Tea and supplements are the two most popular preparations for valerian root.

Hot tea is comforting and relaxing, and with valerian tea, you have the extra benefit of a boost in sleepiness. Try this recipe. You can usually find dried valerian root at health food stores in the bulk section.

Valerian root powder is widely available as a nutritional supplement and comes in capsules, tablets, or liquid extracts.

While capsules are probably the most common form, extracts help concentrate the nutrients from the root in a potent and powerful way. They're beneficial for people who do not like swallowing capsules. Avoid alcohol-based extracts, as they are harsh on your system.

Global Healing's Valerian uses the company's proprietary Raw Herbal Extract Technology™ to concentrate the root's powerful nutrients in a glycerine base. This vegan, certified-organic supplement provides the optimal way to gain all the benefits of valerian in the simplest way.

In general, valerian is safe. The U.S. National Institutes of Health (NIH) reported that, "few adverse events attributable to valerian have been reported for clinical study participants." They add that the side effects that are reported include headaches, dizziness, itchy skin, and gastrointestinal disturbances — but similar effects are also reported for the placebo (a sugar pill) so these are not necessarily attributed to valerian.[2]

Valerian can increase sleepiness, which in most cases is a desired effect, but if you take it for other reasons, be cautious if you need to stay alert on a job or while driving. It can also increase drowsiness the following day.[2] However, a second study found no change in next-day sleepiness when people took up to 900 mg of valerian.[2]

According to the NIH, pregnant women, kids under three years old, and breastfeeding mothers should avoid taking valerian because the risks have not yet been studied. People who take barbiturates or other sedative drugs should avoid valerian, as it will exacerbate the effects.[2]

Always remember to check with your healthcare provider if you're taking any medications to see if there are any possible interactions.

Historically, traditional healers used valerian root for sleep and anxiety issues, but today, science has started to uncover its many benefits.

Its many phytochemical components include powerful phytoestrogens, flavanones, and gamma-aminobutyric acid (GABA) that work together to create a calmer, more relaxed body and mind. This relaxation effect can help with various aspects whether premenstrual or menopausal symptoms, concentration, daily stress and anxiety, and more.

Valerian root has an excellent safety record, but if you are taking other medications, particularly those with a sedative or relaxing effect, use caution when taking valerian.