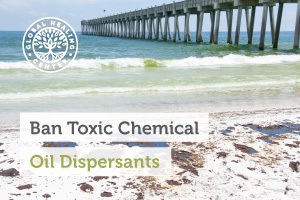 I received word from my friend, Dr. Riki Ott, a marine toxicologist and former commercial fisher in Alaska who has experienced the devastation of the Exxon Valdez oil spill firsthand. She’s focused on raising public awareness of the debilitating and life-threatening impact of oil and oil dispersants on human health. She works directly with the Government Accountability Project to expose the truth about deadly dispersants. For those unfamiliar with the term, dispersants are used to help remove the particles of a particular substance from its surrounding environment.

After the BP Deepwater Horizon oil spill in 2010, Dr. Ott traveled to coastal communities in the Gulf of Mexico and saw the damage inflicted not only by the oil itself but also by the chemical dispersant, Corexit, which was used to cover the damage. Corexit and other toxic oil dispersants move oil beneath the sea surface, where it sinks or forms tar mats and washes ashore – ultimately harming wildlife and threatening human health for decades after its use.

The Environmental Protection Agency (EPA) originally said it would regulate dispersant use by this fall, but the agency recently announced a two-year delay. In response, Dr. Ott has started her own petition to the EPA. It states:

“The BP Deepwater Horizon oil spill was the worst environmental disaster in American history. BP’s experimental use of Corexit dispersants made the concern worse by causing more harm to wildlife and people. Ban toxic dispersants without delay to avoid repeating the same public health and environmental tragedies that the EPA allowed in the Gulf of Mexico.”

Do you think the EPA should ban the use of toxic oil dispersants? Click here to sign the petition.

Corexit Is an Old Concern

Corexit dispersants were tested during the 1989 Exxon Valdez oil disaster in Alaska and were found to harm people and the environment. The same Corexit products were used following the 2010 BP oil disaster, despite manufacturer’s warnings to “not contaminate surface water.”

Studies have confirmed that the effects of oil and dispersant combined are more deadly than oil alone to both sea life and people, especially children. Whistleblowers further exposed the truth behind Corexit in the Government Accountability Project’s investigative report, “Deadly Dispersants in the Gulf.”

When the EPA finally opened its public comment period on rules governing dispersant use, public opposition to these deadly chemicals outnumbered industry support by 60 to 1. The EPA promised new rules governing dispersant use in fall 2016 to make things right before President Obama leaves office, but now the EPA is saying the rules won’t be ready until August 2018, 17 years after the process was first initiated.

This delay undermines the EPA’s mission and harms our oceans – and people. As deepwater drilling expands off U.S. coasts, other oil disasters are inevitable. So is dispersant use, as every coastal state has pre-approved use of toxic Corexit dispersants. The EPA must act now to ban the use of toxic dispersants, so we don’t let the same tragedy that EPA allowed in the Gulf of Mexico to happen in other places and to other families.

Will you join me and add your name to the petition and urge the U.S. Environmental Protection Agency to ban the use of toxic oil dispersants?