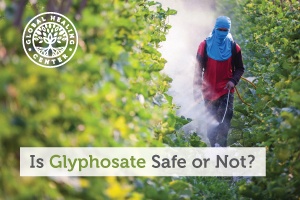 The United States Environmental Protection Agency (EPA) is supposed to review each registered pesticide every 15 years.[1] Under this standard, a toxic herbicide called glyphosate was scheduled to be reviewed in 2015. As of May 2016, this review has still not taken place.

The word glyphosate itself may not be familiar — it’s the active ingredient in Roundup weed killer. There is no denying Roundup’s popularity among farmers and gardeners. The EPA has said that glyphosate is the most widely used herbicide in the nation.[2] Many people, however, fail to realize is that Roundup is actually a Monsanto product. This is the same Monsanto who has worked so hard to make GMO foods a regular part of our diets.

Glyphosate was introduced in the 1970’s. In 1985, the EPA deemed glyphosate a “Group C Oncogene.”[3] This label identifies the herbicidal compound as a “Possible Human Carcinogen”. Several agencies conducted additional research. In 1991, the EPA relabeled glyphosate as a Group E Chemical, meaning non-carcinogenic for humans. Separate entities failed to reach a consensus on the carcinogenicity of glyphosate. The EPA maintains that it is fine. Other associations like the World Health Organization report different findings.[4, 5, 6, 7, 8, 9]

The process is further corrupted by the fact that several of the studies cited were conducted or sponsored by Monsanto[10], Roundup’s parent company. It’s no secret that Monsanto has a long history of putting the public health at risk. Inconsistencies like these have fueled a long-running debate about the safety of glyphosate.

On Friday, April 29th, the EPA posted a report online that came from their internal Cancer Assessment Review Committee (CARC). The report, which can be found here, was from October 2015. CARC maintained that glyphosate is “Not Likely to be Carcinogenic to Humans”, but admitted that most of their studies were “underpowered, suffered from a small sampling of cancer cases with glyphosate exposure, and had risk/odds ratios with large confidence intervals. Additionally, some of the studies had biases associated with recall and missing data.”

The EPA’s own agency admits that their research is flawed, but the agency has yet to address the issue. In fact, the report was removed from the EPA’s website on the following Monday, May 2nd. An agency spokeswoman said the following:

“Glyphosate documents were inadvertently posted to the Agency’s docket. These documents have now been taken down because our assessment is not final. EPA has not completed our cancer review. We will look at the work of other governments as well as work by HHS’s Agricultural Health Study as we move to make a decision on glyphosate. Our assessment will be peer reviewed and completed by the end of 2016.”

Still no definitive date is set to determine the actual safety of the active ingredient in the nation's most popular weedkiller.

It goes without saying that the EPA’s actions have raised some suspicion. The exposure to glyphosate in this country is staggering. Urine tests show that Americans have a significantly higher exposure to the compound than Europeans.[11] Glyphosate has even been found in the blood and breast milk of many Americans.[12] It’s even showing up in some organic food products.[12] This further contributes to the controversy. There has been ongoing and growing concern over the amount of glyphosate residue found in food.[13] Still our government allows this product to remain on the shelves. The safety of this herbicide is a year overdue for its regular evaluation, but Glyphosate producers have yet to incur any consequence or even disruption to sales of their products.

Several legislators have expressed frustration with the EPA over its handling of glyphosate. Although this product has been on the market for over 40 years, the agency has yet to prove that it’s not a public health concern. The next ruling is vaguely scheduled to come at the end of 2016. That ruling is likely to meet significant opposition as other organizations reach conflicting conclusions. And to top it all off, the US Food and Drug Administration does not test for glyphosate in food.[14] That's a little suspicious in and of itself. Is there anything to be done?

How We Can Stop the Use of Glyphosate

The World Health Organization believes that glyphosate could be making people sick, and potentially doing so on a grand scale. The Environmental Protection Agency is not protecting us from these potential dangers. Please join us in speaking out against potentially dangerous chemicals like glyphosate. Contact your senator and your representative. Let them know that you are not satisfied with this failure to protect the public health. You can also join our friends at the Organic Consumers Association as they reach out to the EPA directly. Just sign this petition to make your voice heard.

We’ve seen the people rise up and gain the attention of our federal legislature before. Less than two months ago, GMO-friendly legislation was defeated in the Senate. If the public continues to reach out, we cannot be ignored. We deserve to know what we’re being exposed to. Speak up with us and let’s get to the bottom of glyphosate.